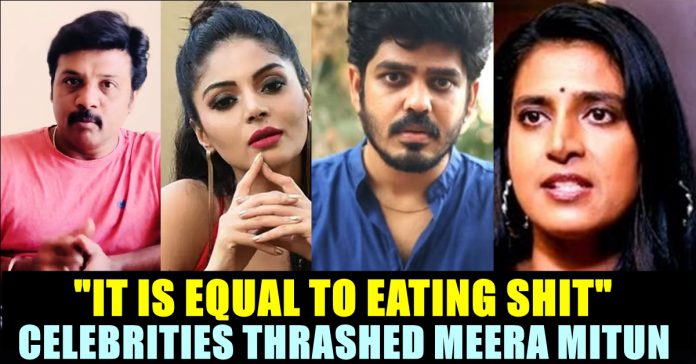 Followed by actress Kasthuri Shankar, Model Sanam Shetty, Vignesh Karthik and few other familiar personalities who slammed Meera Mitun for constantly making derogatory comments against actor Vijay and his wife, fans started trending hashtag against her in the micro blogging social media site. Meera Mitun, a model and former Bigg Boss contestants has been making derogatory comments against top-tier actors of Kollywood, is currently facing the wrath of the fans who are abusing her with extreme bad words.

She said that actor Vijay is a product of Nepotism and his fans are uncivilized. Alleging that the actor’s last two films became utter flop, Meera Mitun claims that she is more successful than Vijay and any other actor in Kollywood. At one point, she went far beyond the limit and started intervening in the personal life of the actor which made celebrities to react.

Actress Kasthuri who tweeted saying that her inbox is filled with the requests asking her to talk about Meera Mitun, her co-contestant in Bigg Boss house, said that only talentless unprofessional losers will imagine conspiracy theories & complain of nepotism in Kollywood.

Ok, My inbox is getting flooded with Meera Mithun queries.

Only 2 things help you succeed in Tamil Industry: EXTREME talent and some luck. This applies to all, whether they are family or mafia or whatever.
This is why we have EXTREMELY talented hardworking dedicated actors like VIJAY, SURYA, KARTHI, JAYAM RAVI succeed. nothing to do with

Sanam shetty uploaded a video confronting Meera Mitun’s allegation. She said that what Meera stating are not believable at all. “Vijay who grew with his sheer hard work and talent would never care to respond to you. Think thousand times before talking about such established personalities. It will backfire you” Sanam warned Meera.

Rise to their level if u can @meera_mitun. Don't try to pull them down with lies and abusive language. You can't! Enough of ur nonstop publicity stunts🙏
I'm proud to be a fan of Thalapathy @actorvijay.#Master #Vijay pic.twitter.com/2GaQp81UwC

Oruthara thappa pesi publicity thedikardhu is equal to eating SHIT to become healthy ! – It will kill you someday

Revanth Charan, owner of Rohini Silver screen, posted a tweet indirectly denoting that he is going to file a defamation case against Meera. He uploaded a picture which showed the punishment for defaming an individual under section 500 of Indian Penal Code. It said that defaming a person shall be punished with simple imprisonment for a term which may extend to two years, or with fine, or with both.

Apart from these known personalities, senior actor and director Chithra Lakshmanan condemned Meera Mitun through his youtube channel for defaming seasoned actors such as Vijay and Suriya without appropriate reason.