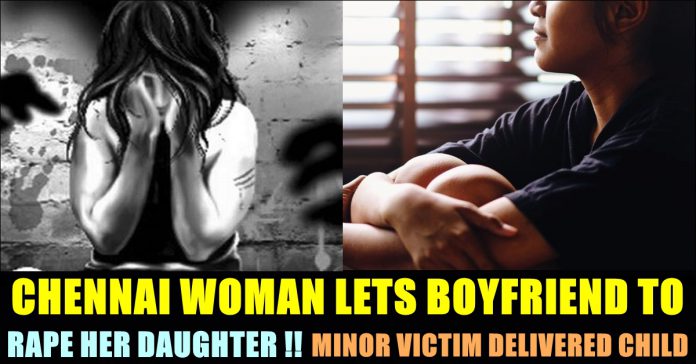 In a shocking crime that took place in Madippakkam of Chennai, a 36 year old woman and her boyfriend became a cause for the pregnancy of a 15 year year old minor girl. Reports suggests that the victim is a daughter of the 36 year old woman and the Police have arrested the duo under The Protection of Children from Sexual Offences for involving in such a heinous crime.

The woman let her 32 year old boyfriend to rape her daughter on multiple occasions, says reports. They both got arrested and taken into custody by the Madipakkam all women Police on Wednesday. The mother got into a relationship with one Sekar after separating from her husband few years back. Sekar is a house painter by profession and was residing in Shollinganallur.

After getting committed to Priya (name changed), Sekar visited her house in a frequent manner. He reportedly started sexually exploiting her elder daughter, aged 15 years. When the girl narrated the trauma she is going through, instead of taking action against Sekar, Priya asked her daughter to silently “cooperate”.

The minor girl became pregnant due to the sexual exploitation. During September month, Priya left her daughter in her brother’s house without informing him about her pregnancy. After the victim informed her maternal uncle about her pregnancy, he tried to contact her mother but failed.

He registered a complaint at the all-women police station in Madippakkam. A complait was registered and the teenage survivor was sent to a rehabilitation home where she delivered a male child in October. Police launched a hunt and arrested Sekar and Priya on Wednesday. This incident has created a huge outrage in social media with people slamming Sekar and Proya for ruining the life of a minor child.

“This is Barbaric 💔Failure of implementation of stringent punishment for offences like these is resulting in multiplication of such crimes” wrote an Internet user to express his emotion towards the crime whereas another one said “Such a Shameful act.. May that girl will be fine soon.”

where are we headed as #human?