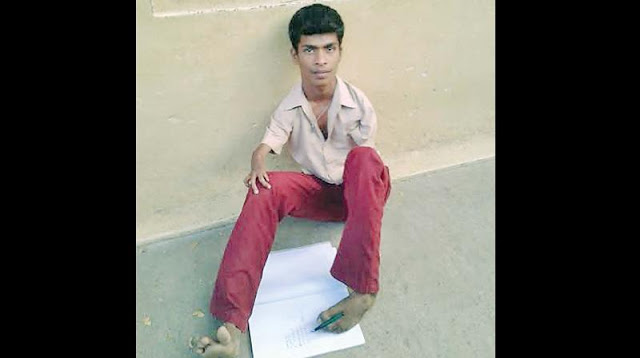 Namakkal: Two years ago, DC had chronicled the spectacular tale of a differently abled boy who wrote the Class 10 board exams with his toes.
Now two years later, the boy, M.Megesh will be back in the examination hall, gripping the pen between his big toe and long toe in his left leg to toe his way to the plus-2 exam which begins on Friday.

Unlike the other students, he can’t sit on a chair and write on a desk. The 18-year-old boy will sprawl out on the desk, clutching the pen between the toes.

Mehesh’s life is a heart-wrenching lesson on hard work and grit triumphing over a trail of grief and trauma. A native of Kodipalli in Krishnagiri district, he lost his mother just after his birth.

His father, Manjunatha too died when he was barely six years old. Destiny brought him to Salem where his grandmother Parvathi, a poor hawker, provided him care.

As she was ageing, she put him in the Nehru Memorial Sampoorani Ammal Higher Secondary School at Ethirmedu at Komarapalayam for the differently abled.

Though his hands and legs are crippled, he loves to sprint on the tracks. He has won medals  in athletic meets for the differently abled children.
He scored 282 out of 500 marks in Class 10 exam.

“I have prepared well. I will write with my toes. Depending on the marks I score, I will decide on what course to take up,” he told DC. He will “toe” his exams at the Komarapalayam boys higher secondary school from Friday.

He Pretended To Be Doctor, But Later He Stole Canon EOS 5D Mark III Camera in Vadapalani
81-Year-Old Bagicha Singh Has Travelled 6,00,000 Kms On Foot To Rid India Of Its Addictions