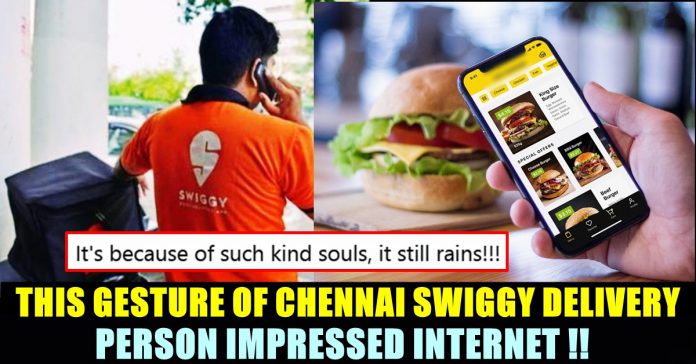 A series of tweets shared by a twitter user named K Balakumar regarding an experience he had with a swiggy delivery person who is operating between Virugambakkam-Valasaravakkam area in Chennai, impressed the users of the micro blogging social media site. Sashvath, the delivery partner who felt responsible for a mix up that took place, offered to pay the compensation to Balakumar with his own money which made the latter to share the entire incident to appreciate the humanness of the individual.

If you live alone or just can’t cook edible food, then there is only one solution that most people who deal with this resort to – ordering online. In such situations, most of us will prefer ordering in Swiggy as it is one of the most famous food delivering app. The Online food delivering app works by employing people to deliver food from the hotels and restaurants to the people who placed order from home or office.

K Balakumar whose Twitter bio says that he is a writer and freelancer, ordered food through Swiggy on 19th of December around 7 PM. He who received his parcel on time, immediately found that he didn’t receive what he ordered and managed to stop the person who delivered it.

After making him understand that some gaffe had happened, Balakumar let the delivery person to reach the restaurant to get things sorted out. Only after allowing him to leave the place, Balakumar realized that he didn’t have his number and the order he was supposed to receive was delivered as far as the app was concerned.

However, the delivery person returned after half an hour only to inform that there had been a mix up and the order that was supposed to be delivered to Balakumar was delivered to another house where they had eaten it. “The restaurant had told him that it can’t do anything. The order was worth around Rs 600.” read the tweet of the writer.

The delivery person who took the responsibility, apologised to Balakumar and offered to pay the amount he lost. “I refused. He need not have returned and explained things to me. I did not have his number. In the app, the food was delivered. But the guy was just trying to be good human.” Balakumar lauded Sasvath, the delivery person who is working in Virugambakkam-Valasaravakkam in Chennai.

Check out the series of tweets posted by Balakumar below :

He asked what I had ordered and I showed him my e-bill. He understood some gaffe had happened.
He asked for sometime to go back to restaurant & get things sorted out.
After he left, I realised that I didn't have his number. The order as far as app was concerned was delivered.

The restaurant had told him that it can't do anything.
The order was worth around Rs 600.
The delivery person was matter of fact. He said the order cannot be delivered. He apologised, saying that at the end of day it was his mistake. He was polite, without asking for sympathy.

His name was Sashvath. Swiggy is lucky to have such delivery persons. He operates in Virugambakkam-Valasaravakkam area in Chennai. @Swiggy_in @SwiggyCares

Sashvath deserves more than a pat on his back.

He also declared Sasvath as a hero as he tried to provide another parcel that he had with him which he had mistakenly delivered in the first place. “If you can reward him that’ll be great.” Balakumar said in another tweet.

Thank you. Seriously, your delivery person Sashvath even offered to give the other undelivered parcel he had with him (the one he had mistakenly delivered in the first place) seeing that my old mom was waiting for food. Sashvath is a hero. If you can reward him that'll be great.

Users of Twitter appreciated the gesture of Sashvanth with their whole heart. All involved in the incident showing Love, Care and Thanksgiving. Merry Season of love, a Merry Christmas in advance. A great way to say good bye to 2020!” wrote a twitter user to sum up the entire incident.