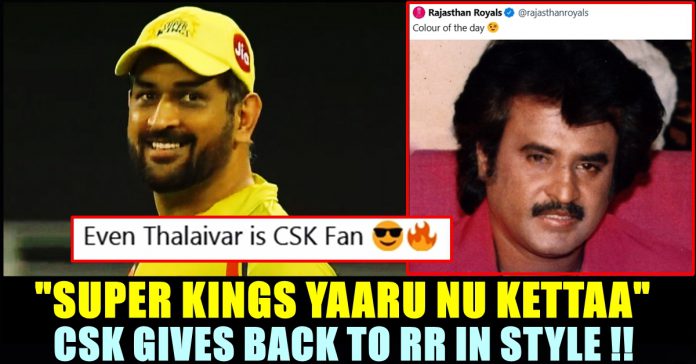 The twelfth league match of the fourteenth season of IPL is scheduled to take place on Monday night between Chennai Super Kings and Rajasthan Royals at Wankhede Stadium, Mumbai. The two teams have faced each other 24 time so far and the Dhoni led team had won 14 matches out of it with Rajasthan owning 10 victories. Now, ahead of the first league match between the two teams in IPL 2021, online banter between the official twitter handles of the two teams have already started.

Rajasthan Royals which is known for its witty tweets and hilarious trolls against all the other teams, uploaded a picture of Superstar Rajinikanth wearing pink shirt and said “Colour of the day” to gain support from the fans. Check out the tweet here :

Colour of the day 😉 pic.twitter.com/SLxVL1L00p

As soon as the tweet surfaced, it garnered 20k plus likes among the fans with various kind of reactions. Rajasthan replied to some of the comments as well. Check out them below :

Let's make this Monday a Royal one! 💪#HallaBol

What came in as a surprise is the reply tweet from the admin of Chennai Super Kings. The admin who is fondly called as “Leo” by fans, uploaded a picture from one of his blockbuster songs and wrote “Super kings yaaru nu keta, Chinna kozhandhaiyum sollum… Kanna!”. In the picture Rajinikanth could be seen walking with yellow colour smoke fuming in his background.

Check out the reply here :

The only 'PINK' that will be rocking today is the one worn by Faf Du Plessis as he flies around taking some epic catches, followed by a heavy hitting knock.😉🔥

Let's go and build our winning streak, giving a royal departure to our opponents. Keep the whistles loud!🙌💛 #Yellove

As far as the match is concerned, batting order of the Super kings looks deeper comparing to all the other teams. Though the team lacks a raw pacer, performance displayed by Deepak Chahar & co in the previous match against Punjab kings gave the team a hope.

Rajasthan Royals contains some of the top-drawer T 20 stars such as Jos Buttler, Sanju Samson and Chris Morris and the absence of Ben Stokes and the doubtful participation of Jofra Archer is worrying the team. However, the Sanju led team had beaten Delhi Capitals in the previous match and looks promising to beat the yellow team.

Comment your views on whom you think will be the winner of tonight’s game !!

A day before the biggest event of Tamil nadu politics, online fans of Superstar Rajinikanth are expressing their dejection over their idol not taking...

After a video of 6 youths dancing on the bridge that is located near G.N Chetty Road, T.Nagar, surfaced in the Internet, they got...