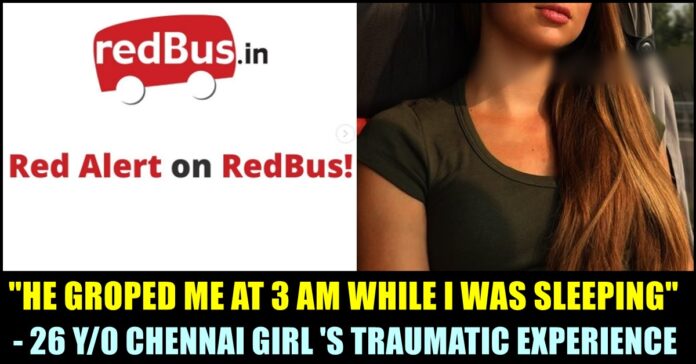 A shocking Instagram post from a girl named Shruthi Prakash about the trauma she faced while travelling from Bangalore to Chennai through Red Bus app has slowly started gaining attention of public 1 week after posting. Plight of women who are trying to travel alone in this place that is filled with predators is a state of worry for a very long time. The post shared by Shruthi shows how “victim blaming” comes hand in hand with sexual harassment in the society and the 26 year old sought help from public to amplify her post. Shruthi was travelling from Bengaluru to Chennai in a bus operated by VHB travels on 7th of July. She bought the ticket to travel from the online platform Red Bus. Shruthi, through her post said that a helper of the bus groped her during 3 am inside the bus while she was sleeping. “When I woke up, I saw a man lying down, below my lower berth. When I asked him to what he was doing there, he responded saying ‘his hands were with him’ even though I didn’t mention it” said Shruthi, according to The News Minute.

“I immediately filed a complaint at the redBus app at around 4 am and by 4.20 am, the bus was stopped. I came to know that the man was a bus staffer” Shruthi further said. It has been reported that the Driver restarted the bus after an hour of scolding the miscreant.

Though there was police intervention, Shruthi and her family members didn’t file a complaint after the victim had to hear the unnecessary advises from the driver and others including “your name will get spoilt” When Shruthi enquired Red bus about the kind of actions that was taken against the culprit, they said that the bus operator would be taking action against the employee. They even refused to blacklist the bus operator saying that no prior complaints were received. Neither of the ticket providing app or travel providing bus operator failed to express their apology and made remarks such as “don’t publicize this story, because you are a woman and your name will be spoilt”. Shruthi also asked to handle the police case herself and was denied her compensation.

After going through all these, Shruthi decided to write about it in her Instagram and the post started getting the reach which changed the events. Shruthi said that the bus operator came for a reconciliation saying he would pay the money if she takes down the post as it was naming the bus company and redBus.

“Serving social shaming. P.s. – I did not file a police complaint because I did not want to bear the brunt of it. Please feel free to amplify the post. Thanks! Update: @redbusindia called to inform that VHB will compensate me only after I give it to them in writing that I will take down my social media posts. 🤣” caption of Shruthi’s post which had 9 slides explaining the entire incident read.

“But it is not about the money, I want something to be done so that this doesn’t happen again to anyone else. As far as I know, the offender is absconding. He ran away when the bus stopped in Chennai and no further action taken on this issue” She said, according to TNM.

Responding to the allegations of Shruthi, the bus operators said that they have terminated the misbehaved staff Vijayakumar immediately. They claimed that they called the customer and apologized and also refunded the travel ticket. “We assured the customer to support her in filing the legal case against the misbehaving employee” they said in their mail, said the report of TNM.

Red Bus spokesperson, while responding through mail, had said that the particular incident is shocking, shameful and regrettable. “We fully empathize with our customer, who was the victim of this incident, and wish to see the perpetrator brought to book” they said through their mail and pointed out about how their app responded within minutes after Shruthi made her complaint. “The bus operator has since terminated the services of the employee with immediate effect and offered help to proceed legally against the said person” the spokesperson said.

However, this is not the first time such incident is happening with Red bus as a woman traveling from Goa to Bengaluru was allegedly molested by the driver of one Sea bird Travels in the year 2016.

Previous articleDeputy Commissioner Sridevi IPS Lauded Actor Ajith Kumar For This Reason !!
Next articleMysskin Replied To The Meme Creators Who Made Fun Of Him !!

This Popular Editor Slams Everyone Who Comes Late To Cinema Hall & Disturbing Others !! Check Out !!

Atleast once in our lifetime, we all experienced that one irritating moment in cinema theatre when a late comer asks us excuse to move...

“What Are You Waiting For?” Kamal Haasan Slammed State Government !!

Kamal Haasan who penned a powerful letter to prime minister Narendra Modi has came up with a series if tweets to slam the state...