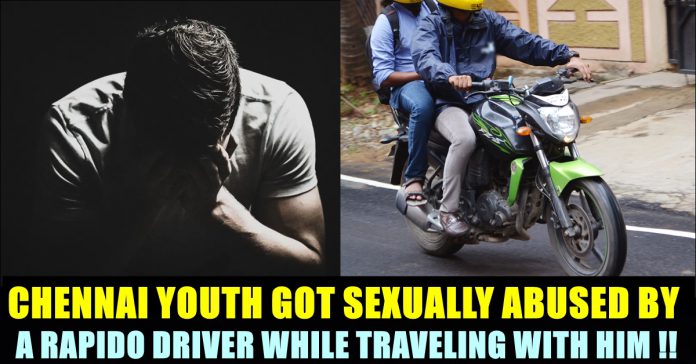 A shocking report of a Chennai youth getting sexually assaulted by a Rapido driver and losing his 22,000 worth cell phone to him has surfaced and created a ruckus among the Internet users. This news made many men to come up with stories explaining the similar trauma they went through in the past.

Kesavathan Raj, a youth who belongs to Ayanavaram, booked a bike taxi to meet his friend in Perambur through “Rapido” bike taxi mobile application. While travelling towards Perambur, the driver Rajesh Kumar stopped the vehicle near Ayanavaram and sexually abused Kesavathan Raj it seems.

Terrorized by this strange activity of Rajesh, Kesavathan Raj seeked help by shouting loud, according to Puthiya Thalaimurai. The driver physically assaulted Kesavathan Raj and snatched his Rs.22,000 worth smartphone, the reports suggested. The victim immediately filed complaint against Rajesh Kumar for sexually abusing him and for snatching his cell phone. Police officers who arrested him, are currently investigating the accused.

Check out some of the reactions in social media for this incident :

Most recently, An alleged serial sexual offender named as Charles got arrested by Chennai Police after he forced an elderly man to have sex with him. The incident came to light after the victim approached Police and made a complaint against the accused who also snatched his belongings after threatening him at knife point to involve in homosexuality.

The elderly man who resides in Arumbakkam, travelled in the auto of Charles who lives in Aminjikarai. At that time, Charles who was driving the auto, stopped the vehicle and threatened the elderly man to have sex with him. Charles threatened him with a knife, according to reports.

When the old man denied, Charles attacked him with his knife and fled from the spot after snatching the money and cell phone of the victim who immediately seeked Police assistance. Acting by his complaint, Police officers traced Charles with the help of CCTV footages and his cell phone signal. After arresting Charles, Police confisticated his Auto, cellphone and knife before imprisoning him.

In an another incident, during September month of last year, when a techie booked Rapido bike to go to the Forum Mall in Vadapalani, a driver who was registered with the Rapido, arrived in Car and reasoned that it was raining. Instead of going to Vadapalani, the car went towards Ashok Pillar.

When the customer questioned, the other two members who were already in car, started attacking him and snatched his 11,000 rupees cash. They also stripped him completely and captured photographs to blackmail him. They threatened to upload the photographs in social media and asked him to arrange Rs.50.000. However, the victim registered a complaint to the Police and the trio were arrested after being traced by the Policemen who used one the accused’s mobile number.