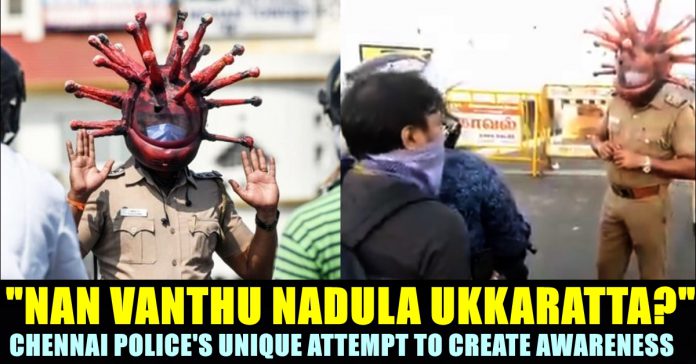 Chennai Police are giving their everything to make people stay home. Few days ago, we saw a traffic police shedding tears while requesting people to stay at home. Few police officers are giving a severe beating to youngsters who are roaming around without a proper reason. Now, a police officer came up with a creative idea to make people stay at home. He wore a “Corona” helmet to scare people who are roaming in streets in their vehicle.

A police officer named as Rajeesh Babu says that many people are still unaware of the vicious virus. “Corona is affecting older people in large number. But when I question them about it in a Market, few of them couldn’t understand what I am saying. Most of the youngsters will not listen to our words. So we decided to create awareness in a way of gaining their attention” said Rajeesh to media.

Commuters in the Indian city of Chennai are now being pulled over by a policeman wearing a 'coronahelmet.' The headwear is painted red with spikes glued on to represent the coronavirus pic.twitter.com/q1tCa0M7Pl

We have seen youngsters getting punished in various ways for roaming unnecessarily. Meanwhile, senior officials suggested police officers not to hurt people while asking them to go home. In a way of responding to their suggestion, Rajeesh decided to create awareness through “Corona” helmet. “We are making youngsters realize how harmful Corona is to them and to their family members through this awareness. When I say that I will go to their home if they don’t stay home by wearing that helmet, they are realizing the seriousness of this virus” said Rajeesh to the media.

“While I walk in the middle of this road by wearing this helmet, people are getting scared. Our commissioner sir told us that we should not harm the public in any way. People are getting scared of this particular figure. Me and my friend Gautham who is an artist, came with this idea of “Corona helmet. This is made only with the paper” he said to the media.

As Prime Minister announced 21 days lockdown across the country, citizens are very much keen in following it. Cinema celebrities across the nation are insisting their fans to stay at home. However, still people roaming in streets since morning. Several videos of them getting beaten by police across the country are surfacing in Internet constantly. One of a police officer was seen requesting people not to come out of their houses as well. This attempt of Rajeesh Babu to make people stay home is being lauded across by the users Internet.

Comment your views on this unique attempt of Chennai police !!