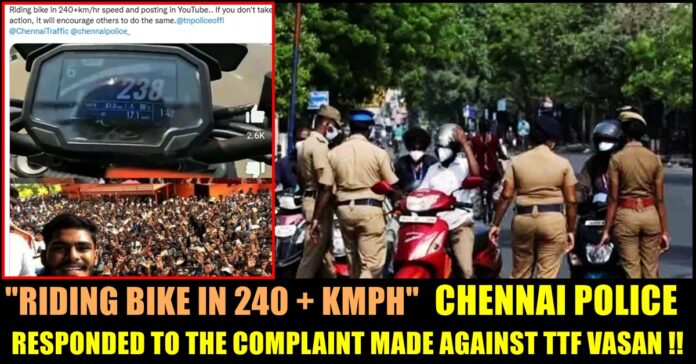 Responding to a tweet which complained about the dangerous bike rides of TTF Vasan, the official twitter handle of Chennai Police said that it is noted. The twitter user named Poovai Shakeer Khan who seems to be a follower of ADMK party, shared the photo of TTF Vasan taking selfie with his fans and the picture of his bike ride through which he reached 247kmph speed. Reply of the police garnered several reactions from the users of online platforms.

On seeing a video of Moto Vlogger TTF Vasan increasing his bike speed until 247 kms per hour for his followers, a number of online users including TR Gayathri Srikanth, a member of DMK women wing, condemned the youngster saying that he is highly injurious to the young society. In the video which is going viral, the youth named Vasan says “Let’s see what happens” and twirls his throttle until it touches 247 kms/hour which is not allowed in the roads of India.

TTF Vasan is running Twin Throttles, a youtube channel that has 2.75 million subscribers. The channel which has uploaded 634 videos so far, predominantly streams videos of Coimbatore based youngster named Vasan riding his bikes. Most lately, Vasan uploaded a special video for his birthday, titling it as “😡Meet up gone wrong because of 🍺Our Birthday party celebration 🎉”

The 38 minute long birthday video of him showed the youtuber being celebrated by thousands of youngsters and himself riding his bike. The video garnered 2 million views in Youtube with nearly 3 lakh people liking it. Majority number of comments that surfaced for the video are positive as well. It has been reported that nearly 8000 fans of TTF has attended the meet up. In the video, many youngsters could be seen kissing and hugging TTF out of love and insisting TTF to pose for a picture with them.

As soon as the birthday celebration video caught the attention of mainstream online users, Vasan started receiving criticisms for influencing youngsters in a dangerous path. Linking a recent incident where a youngster committed suicide after his parents denied to buy him a bike, movie reviewer Prashanth uploaded a video in his youtube channel advising kids not to get influenced by the videos of Vasan. 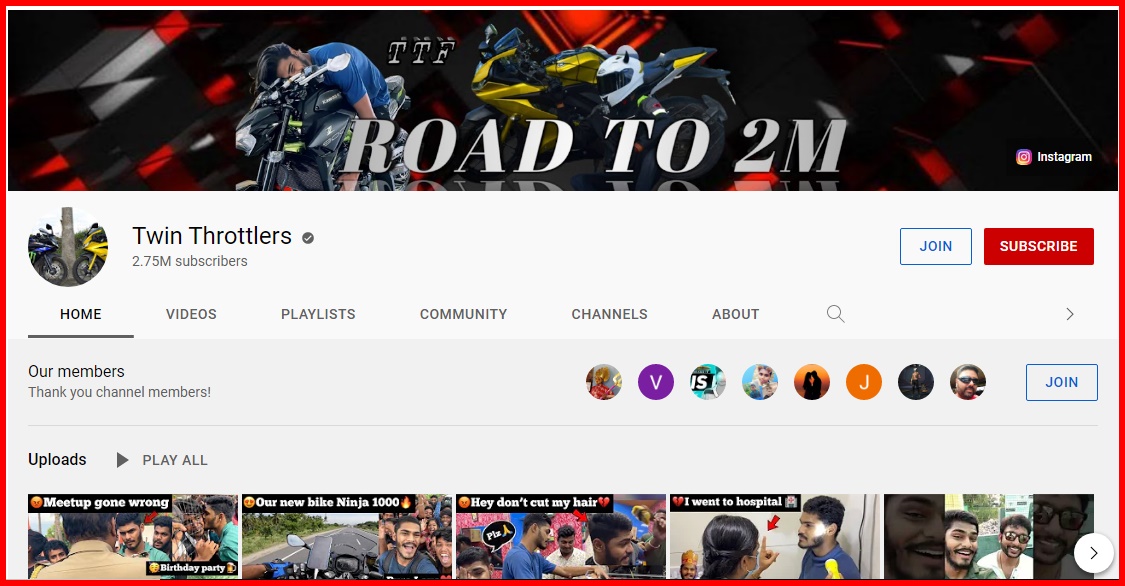 Among the many twitter users, an online user came up with a tweet writing “Riding bike in 240+km/hr speed and posting in YouTube.. If you don’t take action, it will encourage others to do the same” and tagged the twitter handles of police department.

Riding bike in 240+km/hr speed and posting in YouTube.. If you don’t take action, it will encourage others to do the same.@tnpoliceoffl @ChennaiTraffic @chennaipolice_ pic.twitter.com/CmqzYygiPQ

Here’s how online users reacted to the reply of Chennai Police  :

Dear Team, not only him.. many youtubers doing this from Tamil Nadu. Please take action.

@ChennaiTraffic @tnpoliceoffl dear team, pls. Take action immediately to avoid accidents in future.. 🙏plsss… This should not be encouraged in public roads…

Very worst example to the coming generation..
Not only arrest but his license has to be suspended for few years. @CMOTamilnadu

We are expecting and believing your action

Give him a punishment not under ipc!? Make him to work traffic incharge, government hospital accident and trauma ward! Also in mortuary!? Then he will realise his mistakes and won’t do again

Pakistan Getting Brutally Trolled By Indians For Their Post Before Attack !! HILARIOUS !!

The nation woke up to the news that Indian Air Force has carried out a surgical attack on Pakistan as a retaliation to Pulwama...

Famous Actress Criticized CM Stalin Based On His Recent Pictures With Narikuravar Family!!

Pictures and Videos of Tamil nadu CM MK Stalin having breakfast with a Narikuravar Family went viral in social media platforms on Friday. The...