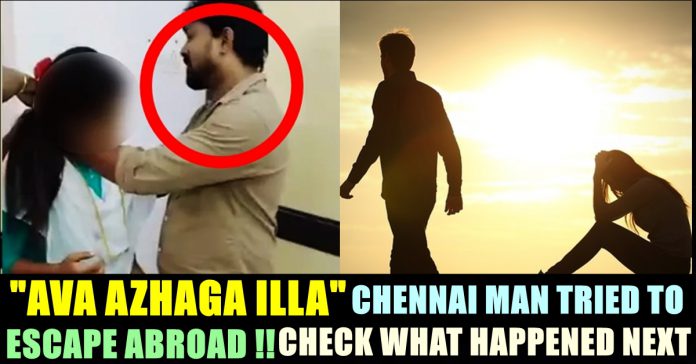 Kavitha lives in Labour School street of Anakaputhur, Chennai. She has been involved in a relationship with Venkatesh who lives in Pozhichalur. Their relationship successfully lasted for four long years till Venkatesh decided to break up with her when several number of problems continued to take place between them.

Kavitha who got frustrated with this change of behaviour of Venkatesh, immediately registered a complaint in Shankar Nagar Police station. In her complaint, she alleged that Venkatesh treated her like wife and betrayed. When Police officers reached the place of Venkatesh to inquire, he attempted to escape to a foreign country, according to report.

Police officers brought him to the station and inquired him regarding the complaint of Kavitha. During the investigation, Venkatesh accepted to police officers about loving Kavitha for four long years. He even confessed to police that he tried to leave Kavitha as she is not looking “pretty”.

After hearing to his confession, Police officers who came to know about Venkatesh’s previous attempt of flying to abroad and Kavitha’s multiple suicide attempts, decided to conduct marriage to the couple in police station. By getting the consent of both the families, Police officers made Venkatesh to tie knot to Kavitha. Police officers asked Kavitha to vopus her complaint and blessed the couple before sending them to their home.

As soon as the news surfaced, people who belongs to social media platforms started reacting to it. “Police department should do the same if a girl tries to betray a guy” said one of a netizen who saw this news.

Let us know your views on this marriage conducted by Police officers by commenting below !!

Rajasthan Royals Proudly Shared The Number Of Dot Balls They Bowled Against CSK !!

Day after chasing CSK's total of 126 runs with 3 overs to spare, official twitter handle of Rajasthan Royals came up with a tweet...