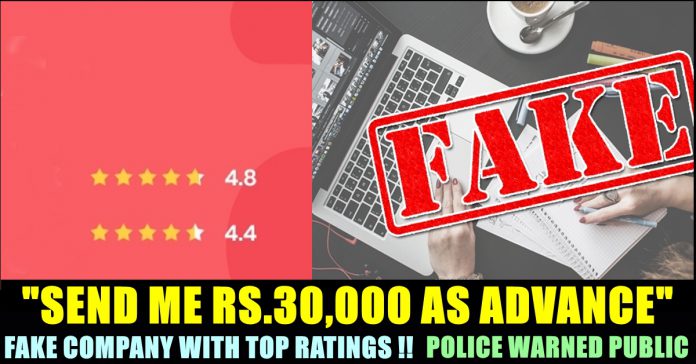 A Man named E Jayakumar who is in his late 40s got arrested by The Adyar Cyber Cell Police on Wednesday for running a fake transport company through an online portal with top ratings. He reportedly cheated money from people by making them believe that he provides transport services through online portals. After arresting him, Chennai Police warned people to be aware of fake companies as online portals are listing them at top with high rates without conducting proper verifications on their background.

To make his fake company available at top searches, the accused who is identified as E. Jayakumar had paid Rs.7,000 per month to India Mart, an online portal, according to Police officials. Such online portals enjoy immunity under Section 79 of the Information Act, said Police officers who warned public not to believe companies listed by them in online and transact money.

Karthikeyan who lodged the complaint with the police, is a private company employee and was looking for trucks to transport goods for his company. While searching online, Karthikeyan came across the company of E. Jayakumar through India Mart, an online portal on 16th of April. The accused had his fake company in Poonjeri at Mahabalipuram, according to the online portal.

On seeing the good ratings the company maintained at India Mart, Karthikeyan contacted Jayakumar and stated his requirements. Jayakumar promised to send two trucks to the location of Karthikeyan and demanded Rs. 30,000 as advance money. He reportedly said that he will receive rest of the money post delivery.

As soon as receiving the money through online transaction, Jayakumar switched his cell phone off. After realizing that he got cheated, Karthikeyan approached the Adyar Cyber Cell and registered a complaint. Police arrested the accused immediately and said that he was working at a furniture company initially. He reportedly lost his job and started registering himself under fake logistics company in portals to cheat people.

Despite of running a fake company, Jayakumar’s company was listed at top as he paid Rs. 7000 monthly to India Mart. The good ratings he was provided by the online portal led people to believe him and get cheated. Mr. V. Vikraman, Deputy Commissioner of Police, Adyar had asked public not to fall for good ratings and top listings in online. He suggested them to verify the authenticity of any company before getting their services.

Previous articleTamil Celebrities Condemned Family Man 2 Even After Watching It !!
Next article“Nayanthara Is Having A Good Life Because Of Me” – Tamil Actor Released Video

'Miracle' Singh Dhoni so nearly pulled it off for Chennai Super Kings, but the format which is defined by fine margins, didn't go CSK's...