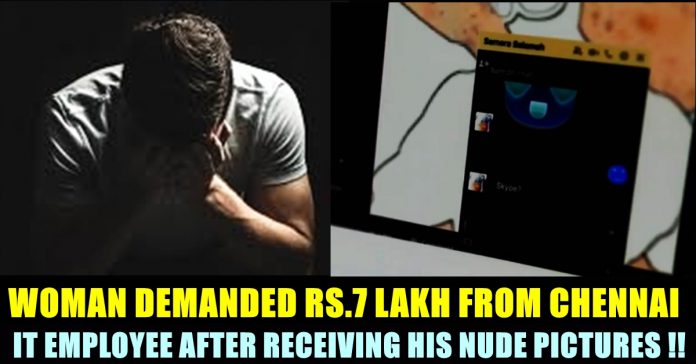 Crimes that are taking place in social media are increasing in vast number as everything, including sexual intercourse turned digital nowadays. Amidst the ongoing lockdown situation, youngsters are finding ways to kill times. To bust the constant stress they are going through due to the “work from home” pressure, IT employees are also involving in online activities such as chatting with friends, playing online games etc.

In a way of elevating their relationship into the next level, the duo planned to share the pictures of their private body parts with each other through online. In the process, the Chennai based youth sent his private pictures and videos to the online girl which was saved by her in her gadgets.

Days later, the woman started blackmailing the youth to spread his private pictures and videos in social media platforms and demanded Rs.2 Lakh from him initially. She reportedly threatened him on sending his pictures to the members in his facebook friend list.

Terrorized over the threatening, the Chennai youth immediately sent her Rs. 2 Lakh through Google pay money transferring mobile app to make her stop from sending his pictures to his friends. While having his sigh of relief after paying the money, the youth received another message from her asking Rs. 5 lakh more. Having no other choice, the youth approached the Cyber crime department in T.nagar.

After investigating about the complaint registered by the youth, Police officers, immediately contacted the facebook administration and disconnected the contact between the youth and the Philippine girl. Police also contacted the Bank authorities to make them stop the 2 Lakh of money from reaching the blackmailer.

As these kind of crimes are increasing in vast number on a daily basis, Police officials suggested the social media using youngsters not to accept request in Facebook from unknown people. They also informed that strangers cheating innocents on the pretext of seeking medical help is taking place in facebook and other social media platforms. They also asked people to give complaints without hesitation if they got cheated in online platforms.

Let us be aware at least from now on and avoid sending our personal videos and pictures to strangers in social media platforms !!