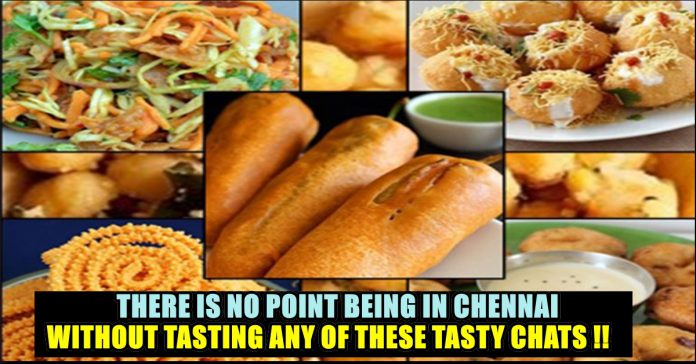 You will never miss to boast about Chennai street foods unless you have tasted these mouth watering food items. If you think Idly and Dosa are the only food items Chennai is popular for, then you must try these street food of Chennai city. Among the most popular street foods in Chennai, Atho Man is originally a Burmese dish, but it has become so popular in Chennai that people have forgotten its origin. Anyway, Atho Man is a plain orange colored noodles dish mixed and served with fresh raw vegetables. You can see small stalls in almost every corner of the streets of Chennai selling Atho Man, and people lined up to buy a plate. Golgappas in north India, Phuchka in West Bengal, Paani poori in Mumbai and Chennai, you can call them anything, but people’s love for these will never fade. These tiny delicious balls filled with potato, imli chutney, ragda, green chutney, and sometimes onion are among the greatest pleasures of life. Image Source
If you don’t fall in love with the masala sundal sold on the gorgeous beaches and roadside kadais of Chennai, then there’s no snack you’ll ever love. It’s a simple street dish made using coconut, raw mango, dried peas, with a dash of asafoetida. You can find them mostly near the beach area and it is best eaten while enjoying the cool ocean air. Image Source
Once poor man’s dish, Boli is among the most delicious street foods in Chennai. The aroma of hot-hot boli will surely draw you to a nearby stall. It is basically a sweet refined flour paratha stuffed with masded toor dal, jaggery, charoli, cardamom, nuts, and raisins. If you have a sweet tooth, you must try this yummylicious street dish. Podi dosai is Chennai’s best kept secret. Made fresh and given to customers within minutes, this one is probably the spiciest and most delicious dosai you’ll ever eat. A “Chennai special food”, it is soaked in rusty red podi that’ll make you sweat as you eat it, but it’s worth trying. Bhajji is a well-liked food that can be seen in street-side stalls of Chennai. Some of the bhajji stalls in Chennai have been successfully running for 20 years and the secret an be felt in their tangy chutney and crispy and soft bhajjis that are best eaten on a rainy day. Jannal Kadai in Mylapore is among those most popular bhajji stalls that serve you magic on a plate. Wada, vade, vadai, wadeh and bara, you can call it anything, but it will remain the best street food in Chennai. This snack can be seen in almost every nook and cranny of the city. Made of spices and Bengal Gram, these deep fried donuts may not be a healthy option, but it certainly is a delicious delicacy. The street-side stalls in Chennai sell vadas with either sambhar orcoconut chutney. A deep fried, crunchy snack sold on the streets of Chennai, Murukku is made using rice flour, salt, gram flour, and cumin seeds. The snacks are shaped into coils and served with tea. Murukku sandwich, which contains tomato, cucumber, and mint chutney, is another street food becoming popular among people. A savory snack, Bhelpuri is originally from the Indian subcontinent. A type of chaat, it is a light snack made of puffed rice, tomato, onion, peanuts, and tangy tamarind and mint chutney. This may not be typical Chennai chaat, but it has become quite popular among Chennaikars. Idiyappam may look like noodles, but they taste quite different. Made with rice flour and served with coconut milk and curry, Idiyappam is a popular street food in Chennai. There’s no dearth of street-side stalls selling Idiyappam in the city.

Popular television star Pugazh got married to his long time girlfriend Bensiya recently and grabbed the headlines. Many celebrities from television and cinema industry...