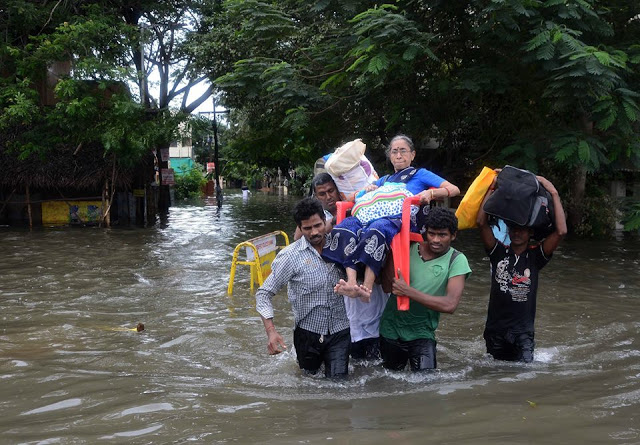 Chennai floods are not a Natural Disaster… It is MAN-MADE..

Tamil Nadu Chief Minister J Jayalalithaa’s response to the floods in Tamil Nadu is frightening. A report in NDTV quotes her as saying, “Losses are unavoidable when there’s very heavy rain. Swift rescue and relief alone are indicators of a good government.” These words are intended to normalise a human-made disaster, and gloss over the pathology of urban development under successive administrations.It is quite usual for politicians and civic officials to blame so-called unprecedented rains for the civic and humanitarian crisis each monsoon brings, and decouple development from disaster. But unprecedented rains occur quite regularly in Chennai. As a city on the high-energy coast facing the Bay of Bengal, Chennai is no stranger to heavy rains and cyclonic storms. Chennai has experienced particularly heavy rains roughly once every 10 years – 1969, 1976, 1985, 1996, 1998, 2005, 2015. 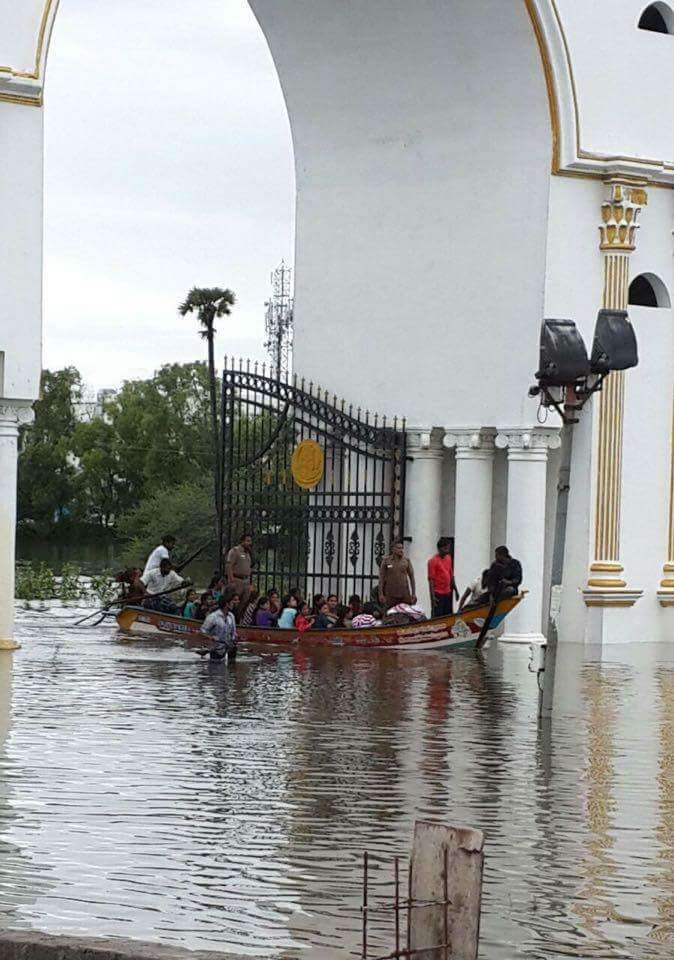 Sathyabama University was constructed in a water body on Old Mahabalipuram Road.
In fact, at 235 mm, last weekend’s rainfall is not even the big daddy of big rains. The Nungambakkam rain gauge recorded 270 mm on October 27,  2005; 280 mm in 1969, and 450 mm in November 1976.
Even in 1976, Adyar overflowed its banks and invaded first-floor houses. But those were the days when Chennai was derided for being an overgrown village, an underdeveloped aspirant to metropolitan status.
Today, Chennai has a host of expensive infrastructure aimed at ushering in a “Make in Chennai” boom – a brand-new (though leaky) airport built on the floodplains of the River Adyar, a sprawling bus terminal in flood-prone Koyambedu, a Mass Rapid Transit System constructed almost wholly over the Buckingham Canal and the Pallikaranai marshlands, expressways and bypass roads constructed with no mind to the tendency of water to flow, an IT corridor and a Knowledge Corridor consisting of engineering colleges constructed on waterbodies, and automobile and telecom SEZs and gated residential areas built on important drainage courses and catchments. 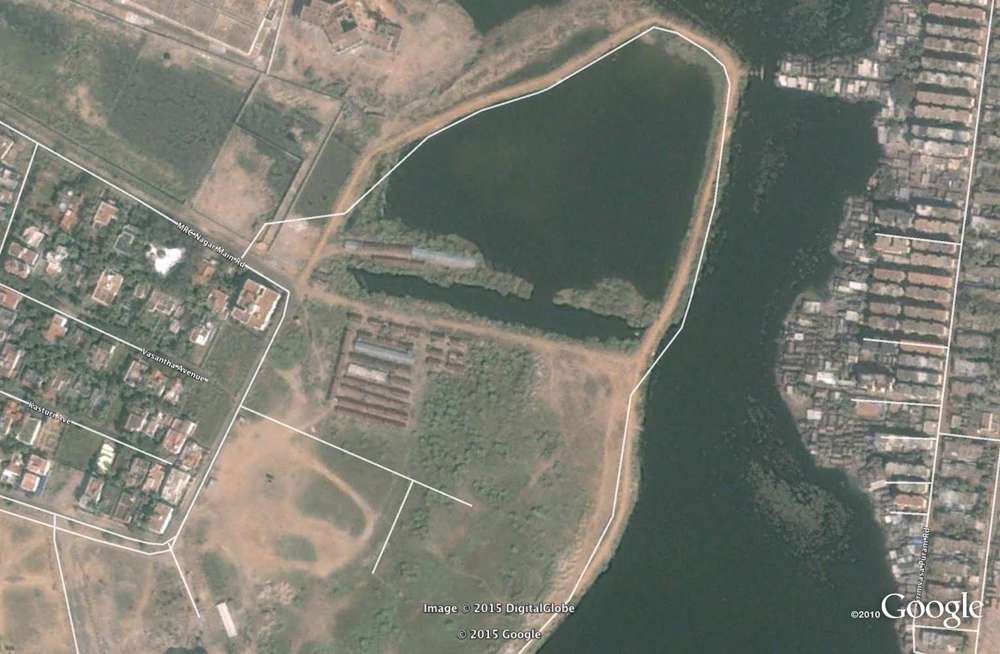 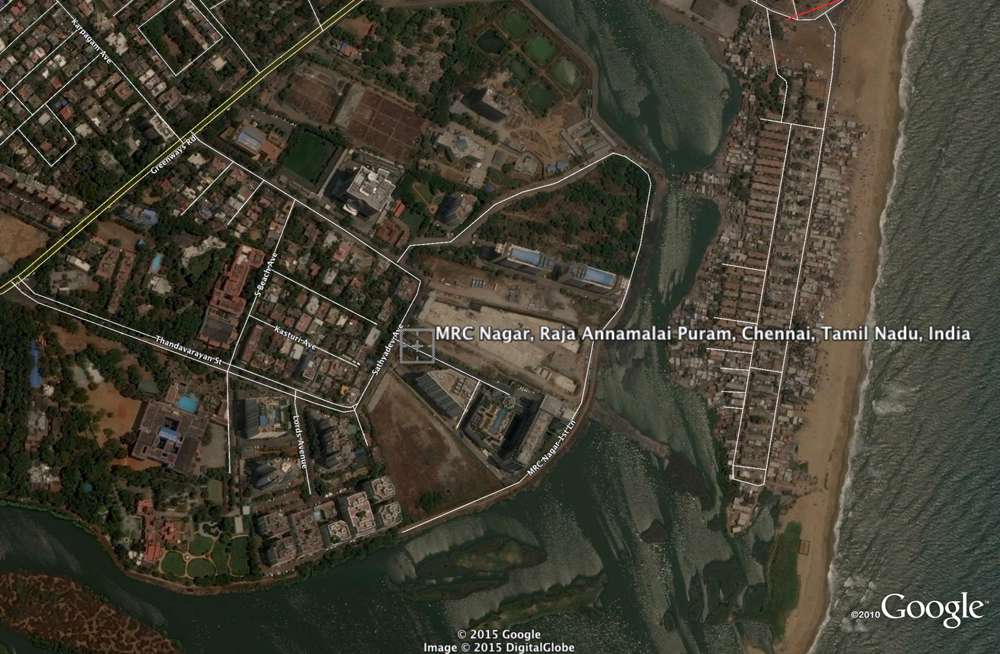 MRC Nagar 2015, Google Maps
With every invitation to Make in Chennai, the city is unmaking itself and eroding its resilience to perfectly normal monsoon weather events. The infrastructure of big commerce has replaced the infrastructure to withstand natural shocks.The 2015 disaster was not just avoidable; it was a direct consequence of decisions pushed for by vested interests and conceded by town planners, bureaucrats and politicians in the face of wiser counsel.The case of the Pallikaranai marshlands, which drains water from a 250-square-kilometre catchment, is telling. Not long ago, it was a 50-square-kilometre water sprawl in the southern suburbs of Chennai. Now, it is 4.3 square kilometres – less than a tenth of its original. The growing finger of a garbage dump sticks out like a cancerous tumour in the northern part of the marshland.  Two major roads cut through the waterbody with few pitifully small culverts that are not up to the job of transferring the rain water flows from such a large catchment. The edges have been eaten into by institutes like the National Institute of Ocean Technology. Ironically, NIOT is an accredited consultant to prepare Environmental Impact Assessments on various subjects, including on the implications of constructing on waterbodies.Other portions of this wetland have been sacrificed to accommodate the IT corridor. But water offers no exemption to elite industry. Unmindful of the lofty intellectuals at work in the glass and steel buildings of the software parks, rainwater goes by habit to occupy its old haunts, bringing the back-office work of American banks to a grinding halt.The vast network of waterbodies that characterised Chennai can only be seen on revenue maps now. Of the 16 tanks belonging to the Vyasarpadi chain downstream of Retteri, none remain,according to Prof. M. Karmegam of Anna University.Virtually every one of the flood-hit areas can be linked to ill-planned construction. The Chennai Bypass connecting NH45 to NH4 blocks the east flowing drainage causing flooding in Anna Nagar, Porur, Vanagaram, Maduravoyal, Mugappair and Ambattur. The Maduravoyal lake has shrunk from 120 acres to 25. Ditto with Ambattur, Kodungaiyur and Adambakkam tanks. The Koyambedu drain and the surplus channels from Korattur and Ambattur tanks are missing. Sections of the Veerangal Odai connecting Adambakkam tank to Pallikaranai are missing. The South Buckingham Canal from Adyar creek to Kovalam creek has been squeezed from its original width of 25 metres to 10 metres in many places due to the Mass Rapid Transit System railway stations. Important flood retention structures such as Virugambakkam, Padi and Villivakkam tanks are officially abandoned.Capacity reductionBefore political rivalry between the two Dravidian parties brought it to a midway halt, an ill-advised Elevated Express freight corridor from Chennai harbour to Maduravoyal had already reclaimed a substantial portion of the Cooum’s southern bank drastically reducing the flood-carrying capacity of the river.Remarkably, all these causes were listed out by the government’s own officials at a seminar on waterways organised by the Chennai Metropolitan Development Authority in 2010. But there seems to be many a slip between enlightened understanding and enlightened action.The Second Masterplan prepared by the Chennai Metropolitan Development Authority glibly authorises built-up spaces with no regard to hydrology. In the Ennore region, the authority has reclassified waterbodies, intertidal zones and mangrove swamps as “Special and Hazardous Industries” and handed it over to the Kamarajar Port Ltd.In Ponneri, a town in a rural part of Chennai Metropolitan Area, developers are executing Chennai Metropolitan Development Authority-approved plans with no regard to drainage. Last weekend, Ponneri received 370 mm of rain – 135 mm more than Chennai did. While it suffered from flooding, damage to property and life was not high. Ponneri is slotted to be developed as a Smart City. But will our dumb engineers be able to build a smart city?
Source :  http://scroll.in/
Previous article9 Lesser Known Facts About South Indian Diva Nayanthara
Next articleMeenkashi College Girls protest against College management

Anchor Maheshwari’s Fitting Reply To An Insensitive Comment Of A Man !!

Video jockey Maheshwari who has been impressing her followers by conducting photoshoots, never shied away to give back to trolls and abuses. Most recently,...