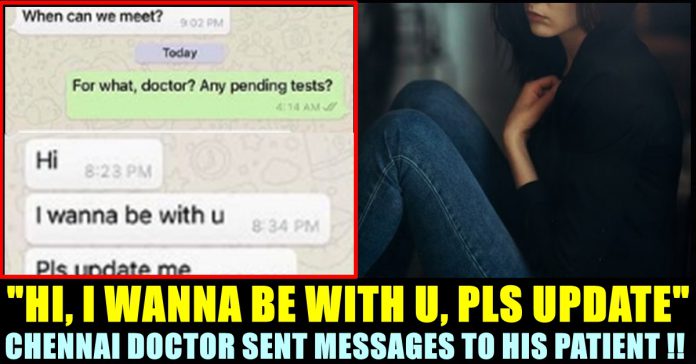 A popular Instagram user named Trinetra Haldar Gummaraju whose bio says that she is an Actor and Doctor, has came up with an accusation against a Chennai based doctor of sexually harassing her through online. The post blew up after it went viral in other social media platforms with reactions slamming the Vitreoretinal surgeon. He got fired by the hospital, according to the post of the 23 year old.

Going by the name “Indoctrination” in Instagram, she narrated about the entire ordeal through one of her recent posts. Uploading the screen shots of the messages that were sent by the doctor, Trinetra says that the accused is from one of the most reputed eye hospitals in Chennai.

Trinetra went to the hospital to get her eyes treated as she is having high myopia with a power of -9.5 in each eye. She who says that her vision is blurry without glasses or contacts, added that she got examined her eyes with the male doctor sitting just six inches away from her.

She accused the doctor of procuring her contact number from the hospital records to send inappropriate texts in Whatsapp. In the screen shots she shared, the doctor could be seen asking “When can we meet?” to her. “For what ? doctor, any pending tests?” Trinetra replies.

In another screen shots, the texts from the doctor says “Hi, I wanna be with you, pls update me”. “Cannot describe how unsafe and angry I was, knowing that this hospital serves very vulnerable populations – and this doctor has probably done worse. I wondered, was my clothing provocative, as my supposedly progressive family accused instantly? Was I too friendly? What did I do to invite this? What if it’s because I’m trans? All of this coming from me, someone that has tried her best to unlearn the shame surrounding sexual harassment, someone that KNOWS that it’s never the victim/survivor’s fault. Despite studying/reading/knowing better, I still questioned myself in that moment, and such is conditioning.” her post read.

Trinetra who is a doctor herself, further says that she feel furious on seeing a fellow doctor displaying such behaviour after taking his oath as a doctor. “This is a time that doctors are doing all they can to save lives, but I must also please remind you that this is still India. No place is truly, entirely safe. A doctor is someone you’re supposed to feel safe around even if you’re naked. That’s the trust one places in a doctor/hospital.” her post further read.

She also expressed her gratitude towards the hospital which immediately fired him for his creepy behaviour. “This, among hundreds of similar experiences reminds me that this is no country for women. Even more so for vulnerable and disenfranchised groups.” she added.

Can anyone be ever safe? What’s with a doctor texting ‘Hello I want to be with u. Pls update me.’

Thankfully the reputed hospital has fired the doctor. #Chennai#MeToo pic.twitter.com/i3xGxpbI36

As the show is nearing its end, old contestants are entering the Bigg Boss house to make it engaged. Yesterday, Fathima banu who got...