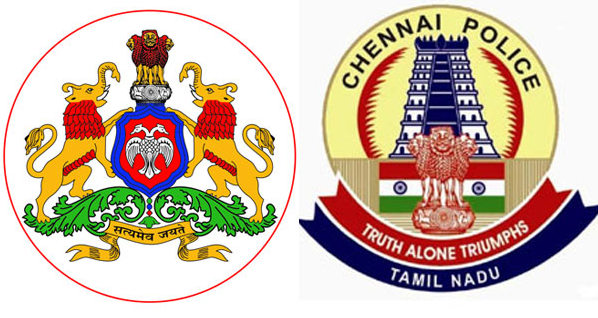 Bengaluru/Chennai, Mar 22: In a case of mistaken identity, the Chennai police rounded up a team of police from the Bengaluru CCB (City Crime Branch).

The Bengaluru police team had visited Chennai in connection with the Malleshwaram blast probe and had picked up two persons.

The family of these two persons informed the Chennai police that some persons had kidnapped their relatives.
The confusion was cleared when top police officers who got to know about the informartion and spoke to the top brass of Chennai and bailed out the officials.
The police had picked up two suspects and were bringing them to Bengaluru when a team from Chennai raided the police party and took with them an officer in the rank of an ACP. The officer’s mobile and revolver was seized. The CCB team were in plain clothes which added to the confusion.
The Bengaluru police have been visiting Chennai several times in the past as well in connection with the probe into the Malleshwaram blasts which took place on April 17 2013 outside the BJP office. The police had suspected the role of an outfit called the al-Ummah. In connection with this case, the CB-CID team of Tamil Nadu had even arrested a person by the name Fakkruddin.
This person who wanted for the murder of several Hindu activists in Tamil Nadu was also considered as a main suspect in the Malleshwaram blasts. The team from Bengaluru had visited Chennai in 2013 to question him.
COURTESY : OneIndia News
Previous articleIndian fan accused by Bangladeshi media of being original creator of Taskin-Dhoni morphed image
Next articleSantosh Hariharan Defends Vijay TV And Insults General Public Who Raised Their Voice Against Super Singer Drama

This Top Hero To Produce Anirudh’s Debut Film As Hero ??

Music composer Anirudh Ravichander is pretty much active in social media platforms amidst this lockdown situation. He who been posting videos of himself playing...

Anitha Sampath’s Important Message To People On This Special Day Of Women !!

Bigg Boss fame Anitha Sampath who is pretty much active in Instagram, came up with an important message to men on this special day...