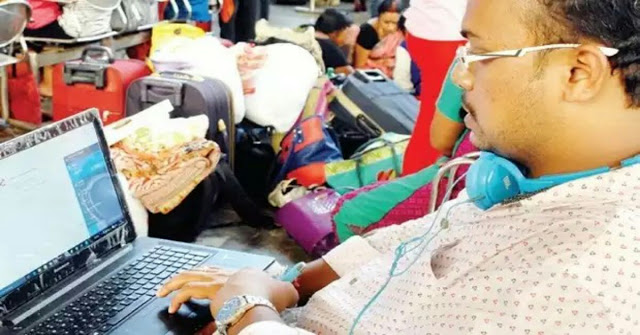 Passengers can now enjoy unlimited high-speed internet service at Chennai Central railway station. The free Wi-Fi service was launched by the union railway minister Suresh Prabu earlier this week.The minister said that at least seven railway stations in the state will have the free Wi-Fi facility by the end of this year. On developing rail infrastructure, he said the Tamil Nadu government should go for a joint venture with railways like other southern States.
Passengers at the station can login to the service which is being provided by RailTel, the telecom arm of Indian Railways, in association with Google. At Chennai Central, a total of 99 access points and 36 access switches have been installed.According to Southern Railways sources, the installed capacity of the Railwire-Google free Wi-Fi system is 1 GBPS. The officials claimed that this is enough to handle the data demand of any number of passengers at a given time. Railwire is the retail broadband arm of Railtel.To make people aware of the facility, the Southern Railways has put display boards and posters at various points at the station.The service was first launched by former railway minister Sadananda Gowda in September 2014.The facility, was implemented on a pilot basis, and offered wireless internet access for up to 30 minutes to users in their laptops, mobile phones and iPads.Rail minister Prabhu also launched the nation’s first Green Rail Corridor, a 114-km long Rameswaram-Manamadurai stretch in Tamil Nadu which ensures zero toilet discharge on rail tracks.

Previous articleEver Wondered Why We Wear Watch On Our Left Hand? Here Is The Behind It!
Next articleThis Is What Thalaivar Rajinikanth Has Earned Totally From The Kabali Movie! Check It Out..

Lately, we have been witnessing numerous scams based on crooks trying to loot money from aspiring actors and misbehaving with women who are trying...

Dhanush Gets Jealous On This Young Actor’s Dancing Skill !! WATCH !!