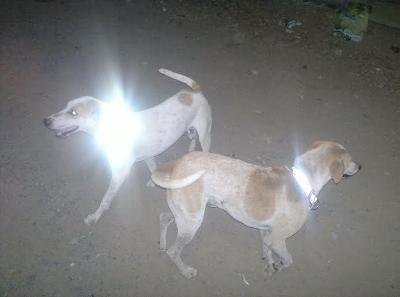 With too many innocent animals being mowed down by racing cars, a non-profit in Chennai has organised an initiative to ensure their safety with an adorable new idea.

As reported by New Indian Express, around 300 stray dogs and cattle across Chennai were fit with reflective collars on Sunday, that allow motorists to spot them from afar. The collars are made of a reflective cloth stuck on a nylon tape – and reflect the light from vehicles to help motorists keep from running them over. Such collars have been successfully test-driven in Bengaluru, Pune and Jamshedpur and were launched in Chennai by People For Cattle in India (PFCI).
“We decided to take one more step and use it for cattle as well.”– Arun Prasanna, Founder of PFCI

Since street visibility in the dark has been a constant issue, 90% surveyed vehicle owners said they had trouble spotting stray dogs or cattle. “It is a risk for motorists too as they see the animal in the last few seconds and try to swerve,” Arun said.
The Chennai Corporation data stated in 2014 that there were more than 80,000 stray dogs in the city. No numeric data for how many were run over by vehicles has been found. But we’re sure that this is bound to bring that number down!