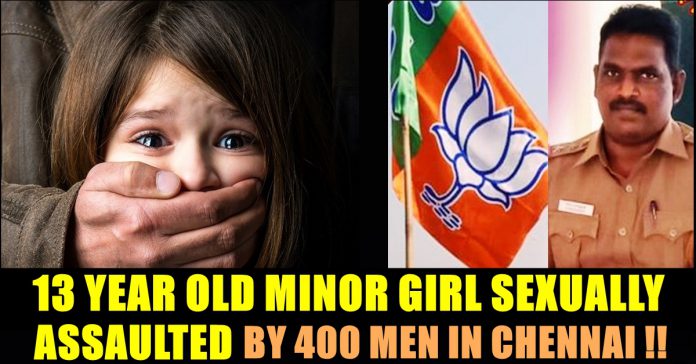 Days ago, a report surfaced saying that C. Pugazhenthi, a Police inspector at Ennore, Chennai and a BJP member named Rajendran got arrested for sexually assaulting a 13 year old minor girl. Now, to our shock, it has been revealed that the minor girl was sexually assaulted by as many as 400 men. Along with the Police inspector and BJP member, 15 people got arrested so far and the investigation is currently underway.

The Inspector was arrested after a woman who was arrested earlier for forcing the victim into prostitution confessed the crimes he committed against the girl. The incident came to light after the girl confessed about the trauma she went through to her mother. The victim’s mother Sabeena approached police as soon as knowing about her daughter’s mental and physical struggle.

Shahitha Banu is a cousin for the victim as she is a daughter of the victim’s mother’s elder sister. Citing health issues, Shahitha requested Sabeena to send her daughter for help. The victim went to Shahitha’s house with her mother’s permission.

To the mother’s shock, even after two long months, Shahitha didn’t send the girl back to her mother. Sahitha’s husband Madhan kumar denied to send the girl back as a result of which the mother fought with them and brought her daughter back. After bringing her home, the mother found something strange with the activities of her daughter. When she asked her daughter about what happened in the 2 months, the victim revealed that she was forced to do sex work by Shahitha and her husband. “She was raped at least eight times a day” said an official who investigated the case, according to Hindu.

The police officers of All women’s police station in Washermanpet started their investigation based on the complaint registered by the mother. Madhan kumar, his wife Shahitha Banu, his mother A Selvi, Sandhya, Maheshwari, Vanitha, Vijay and Karthik were arrested by the Police for forcing the girl into the flesh trade.

Sandhya, sister of Madhan kumar told Police that she had sent the girl to a man named as Rajendran who is their customer. In the investigation, Police found that the girl was raped by the police inspector Pugazhenthi in Rajendran’s office. It has been reported that Rajendran belongs to BJP party. After the girl identified them, Police arrested Rajendran and Police officer Pugazhenthi under POCSO act. It was also reported that the girl was raped by Madhan kumar before being forced to do sex work.

During the investigation, BJP’s Rajendran confessed that his friendship with Inspector Pugazhenthi lasts 15 long years. “Pugazhenthi was working in the Red hills area. For past one year, he has been working as a law and order Inspector in Ennore.” Rajendran said. “I would bring the girl to my office where Pugazhenthi would also come. We both sexually assaulted the girl several times there” he confessed during the investigation.

Police commissioner Maheshkumar Agarwal and Arun, Additional commissioner of North chennai ordered Pugazhenthi’s arrest. Pugazhenthi who got suspended by the Chennai Police, was sent to Puzhal prison after he was remanded to judicial custody. In the investigation, Rajendran revealed that Pugazhenthi had chosen to sexually assault the minor girl in exchange for not reporting the crime committed by the victim’s relatives.

Along with the BJP member and Police inspector, 15 members had been arrested so far. Five Police inspectors are preparing the list of the miscreants who assaulted the minor girl sexually, according to reports. This news has created huge outrage in the state.

Previous article“Learn From Nagarjuna” – Fans To Kamal Haasan After Seeing This Promo
Next articleSuchithra’s Recent Post About Balaji Triggered Netizens !!

JUST IN : This IPL Team Owner Threatened Dhoni Of Kidnapping Ziva !! Check Out !!

Indian Premier League is the most expensive sports tournament in India. Chennai Super Kings (CSK) and Mumbai Indians (MI) have been the two best teams...

Tharshan made his first ever social media appearance after Sanam Shetty issue today. The aspiring actor wrote a long post to let his emotions...

In a shocking incident of an unknown man barging into a classroom and molesting school girls and urinating in front of the class after...