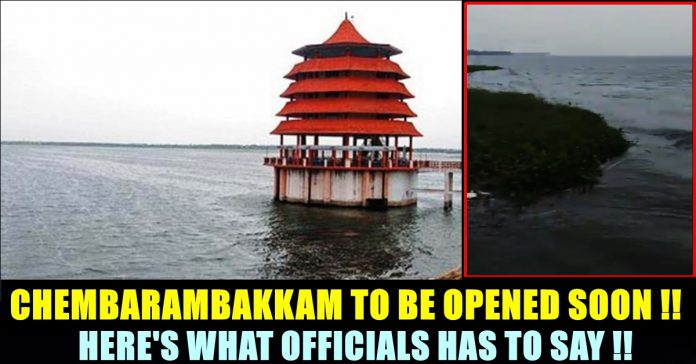 It has been reported that the water from Chembarambakkam lake is going to be released by the noon of Wednesday. The lake’s depth crossed 22 feet as against the total capacity of 24 feet. Officials confirmed they would release 1,000 cusecs water at around 12 pm on Wednesday. People living in low lying areas on the banks of Adyar river have been given an alert. An official from the Public works department asked people not to worry and updated that the inflow is about 402 cubic feet per second. The water is going to be diverted into Adyar river as it has a capacity to carry 60,000 cusecs of water

“The inflow of water has been high ever since the rains began. The inflow now is about 402 cubic feet per second. It is obligatory to take action to evacuate people living in low lying areas and release water. The public need not worry as the water will be released in phases.” an official from the Public works department said.

On Tuesday, Chief minister Edappadi K Pazhaniswamy issued orders to release water from the catchment areas of Chembarambakkam as soon as the level crosses 22 feet, keeping public safety in mind. The water depth of the lake was at 21.2 feet as of the wee hours of Wednesday. The reservoir has received an inflow of 200 cusecs of water since Monday night, officials updated. However, K Phanindra Reddy, commissioner of revenue administration has made it clear that there are no chances of flooding like in 2015.

“Precautions have been taken to release the water in a phased manner so as not to cause flooding like in 2015” he said. He also explained that the water can be easily diverted to Adyar river if heavy rainfall occurs. “When there are heavy rains, the inflow into Chembarambakkam lake would be around 6,500 cusecs only and this can be easily diverted into Adyar river” he added.

#ChembarambakkamLake on Wednesday morning. Around 1,000 cusecs of water will be released from the lake at 12 PM on Wednesday. #CycloneNivar @DeccanHerald pic.twitter.com/9VxP40hPyh

“The storage level stands at 2913 mcft as against the total capacity of 3,645 mcft, which means its 79% full. It would take at least 36 hours of heavy rains to breach the 22 feet level” said an official from the Public works department, according to The new indian express.

Sriperumbudur and Pallipakkam are the other two sources of water for the lake. Officials are expecting that they have to release water by Wednesday night if the intensity continues. The water level of other three reservoirs including Poondi, Sholavaram and Red hills are 1786 mcft, 178 mcft, 2422 mcft.

Meanwhile the hashtag Chembarambakkam lake is trending in the Internet. “This was Chembarambakkam lake last year. It had dried up. There was no water anywhere and offices suggested wfh due to lack of water.” said a twitter user and added a video link to remind people about the past. Check out some of the reactions :

We are not sure how intense would this flooding be. But then, we are sure that one year down the line, we might be back in a drought scenario.

So much politics happens over water, yet, the common man always suffers be it floods or droughts. #Chembarambakkamlake

This was Chembarambakkam lake last year. It had dried up. There was no water anywhere and offices suggested wfh due to lack of water. https://t.co/elHWtEkoKu

Previous article“The Sad Truth” Suchithra’s Emotional Post About Balaji Murugadoss !!
Next articlePeople Lauding Chief Minister For His Reply To A Youngster Amidst The Crisis !!

With Lust Stories, Sacred Games and now Ghoul, Radhika Apte is all over Netflix. Her constant presence in shows bankrolled by the online streaming...