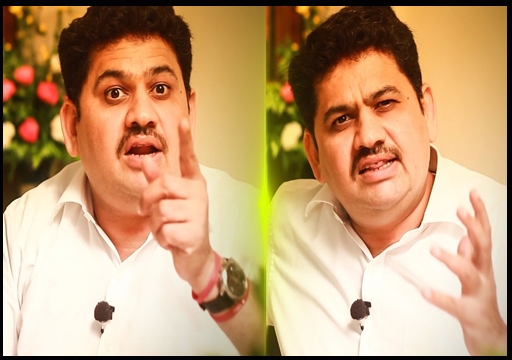 Chef Venkatesh Bhat Lost His Cool & Replied To His Followers Who Criticized Him !!

Chef Venkatesh Bhat of “Cooku with Comali” fame is running a youtube channel on his own with 2 million plus subscribers. Naming it as “Chef Venkatesh Bhat’s Idhayam Thotta Samayal” the seasoned Chef has been demonstrating the making of different types of food items which are close to his heart. Most recently, Bhat came up with a video on how to make “Unni Appam”, a ghee-rich sweet that made him drool during his younger days.

On seeing the promotional video of “Unni Appam making”, a number of online users who are following him, started to criticize him for using excess amount of Ghee which is not good for health. Bhat who lost his cool, replied back to a number of followers, reminding them that he never forced them to eat the food items that are being made by him and also advised them not to accuse him for using “too much of Ghee”.

Days ago, Venkaesh Bhat came up with a Facebook post, suggesting viewers not to take “Cooku with Comali” show too seriously. He requested people not to be judgemental and all of his gestures in the show are done with an intention to make them laugh. The seasoned cook also added that he can understand about how some may feel offended but confirmed that none of his and the actions of others are done to hurt others. 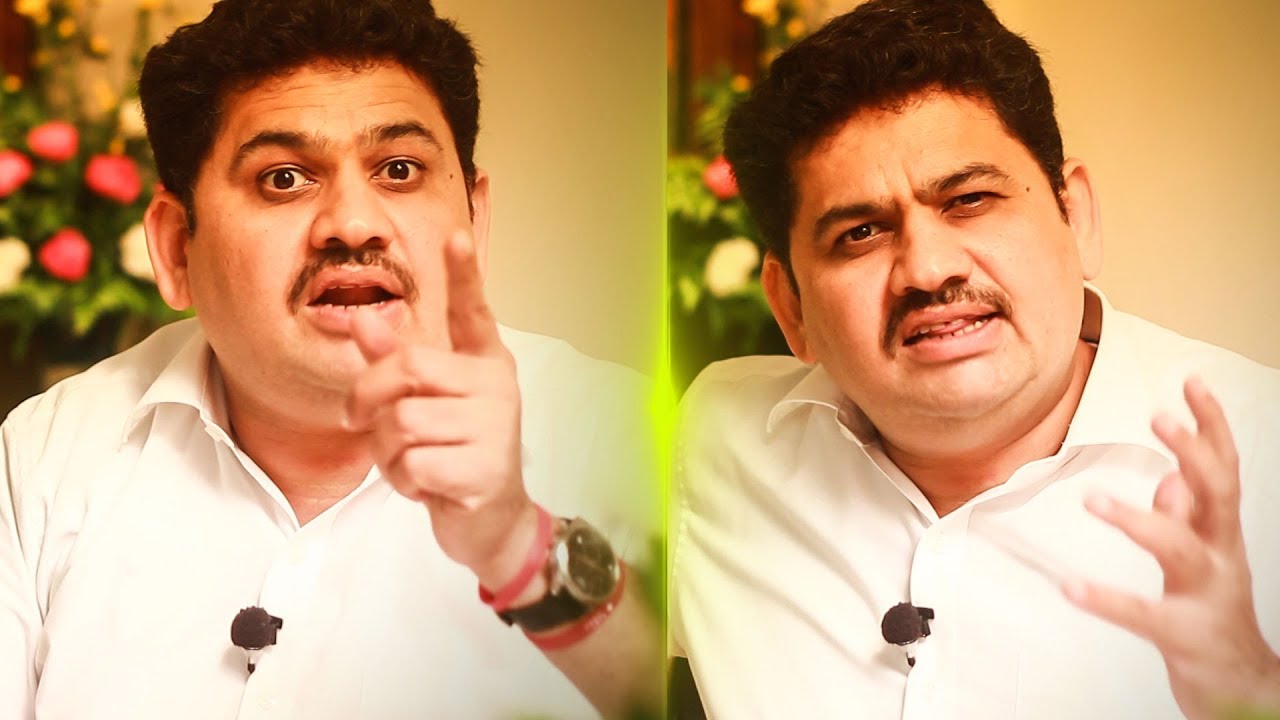 Now, the cook who is pretty much busy uploading promo videos of his youtube channel in his facebook handle, recently uploaded a promo for “Unni Appam”. “I am going to make the most interesting dish. They would call it as “Unni Appam” in Kerala. It will glitter in Ghee. While visiting Iyappan temple, I would go and stand nearby the counter and would move from there only if my father buys me 4 Unni Appams” Bhat sid in the promo video.

“This dish is something that I ate with passion. “Unni Appam”, a prasatham of Iyappan temple will be uploaded in “Idhayam Thotta Samaya”. Try it in your home and share it to others” Bhat said in the promo. Watch the video below :

On seeing the video, a follower named Angel victor asked why he is using excess amount of Ghee. “His dishes are good but the amount of every ingredient he uses are high. Health is important Boss, One could cook for two, three days extra with what you are using” the online user said.

Replying to the user, “You can use it however you want. Did I force you in any way ? This is how I know cooking. It is up to you whether you are watching or not watching, using Ghee or not using” Bhat replied. 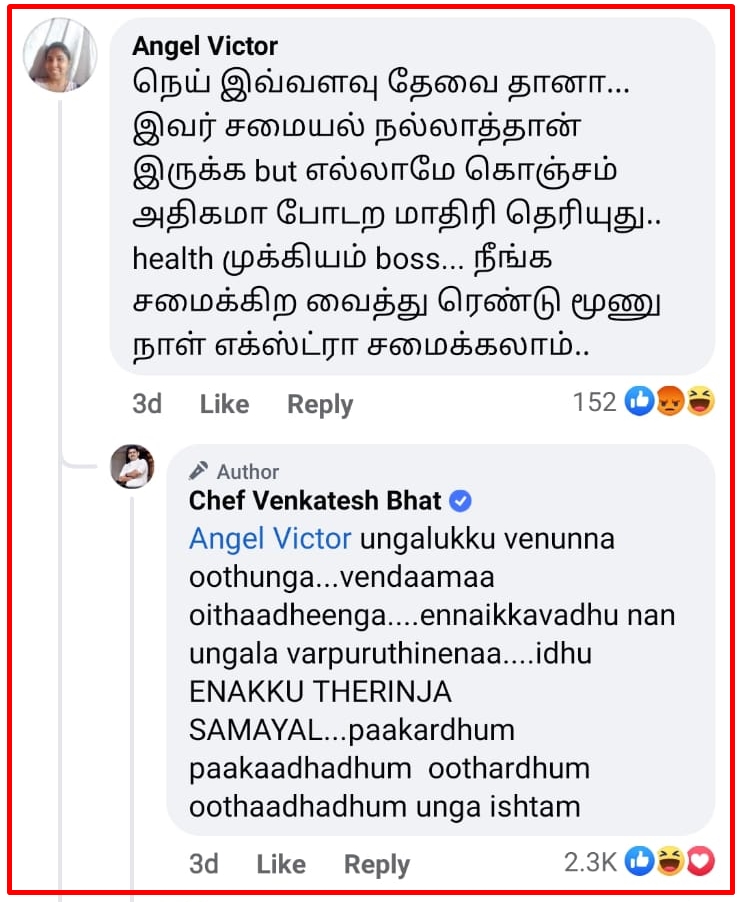 Another user said that he is not going to try that particular dish at all. “Life is too precious. Better to lead a healthy lifestyle than stay FAT& unhealthy” a follower criticized to which Bhat replied back “absolutely your wish.. did I tell u to eat it… never.. its just to share my knowledge.. u have all the rights to say its unhealthy but u cannot accuse me of adding too much ghee and you can cook for 4 days with that ghee..” 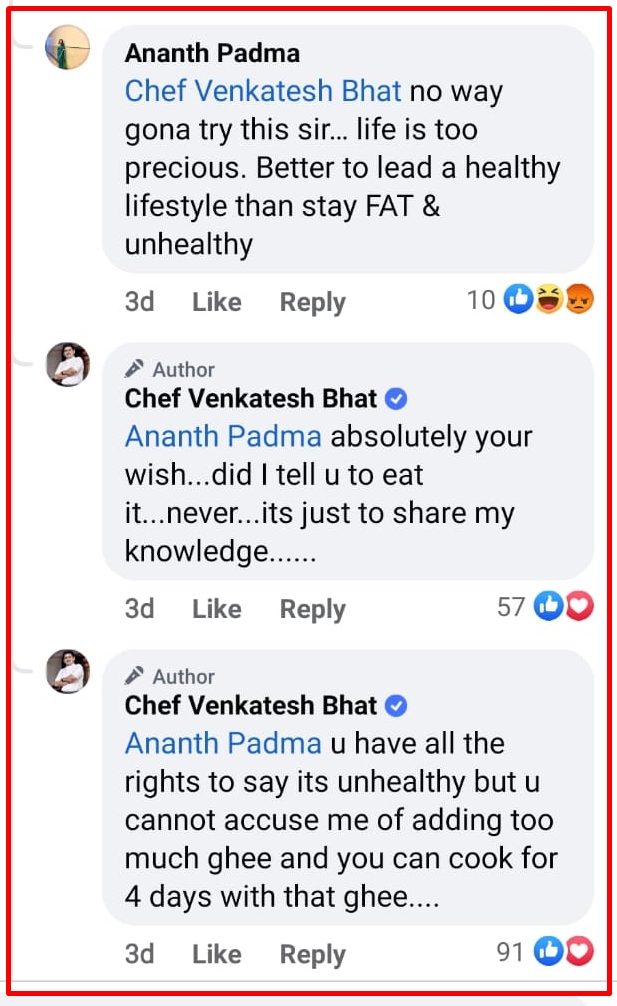 Here’s some of the other replies he provided to his other followers : 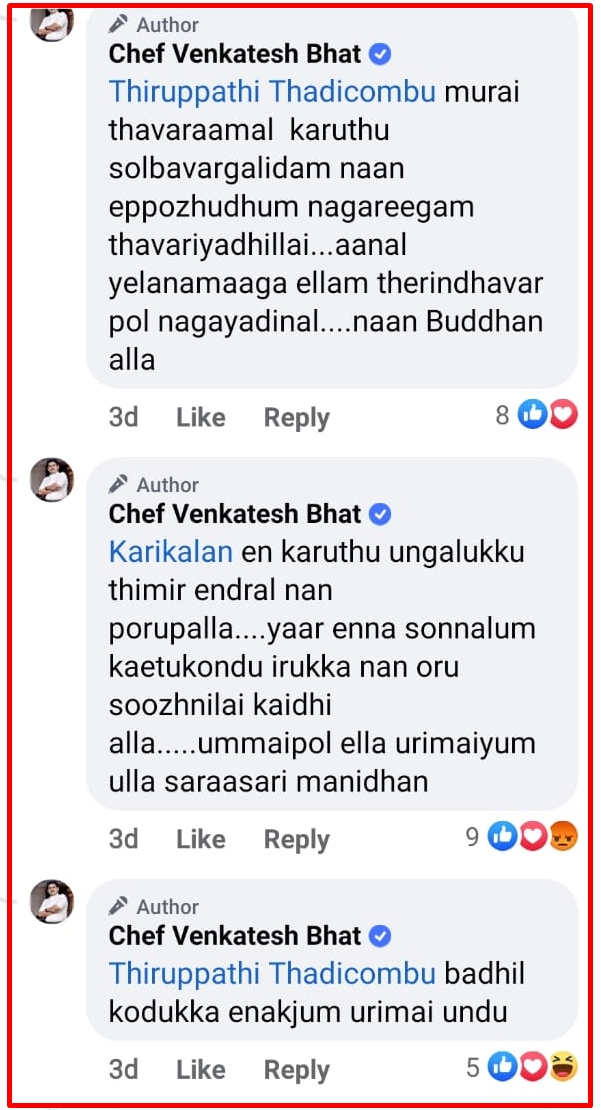 Here’s the full video of the making of “Unni Appam”:

MS Dhoni loves outsmarting the opposition with his quick thinking, innovative field settings and clever bowling changes. But he also knows how to keep...

“Top Star” Prashanth Says “Shrooovv” In His Own Style For His Friend “Karan” !! Watch !!