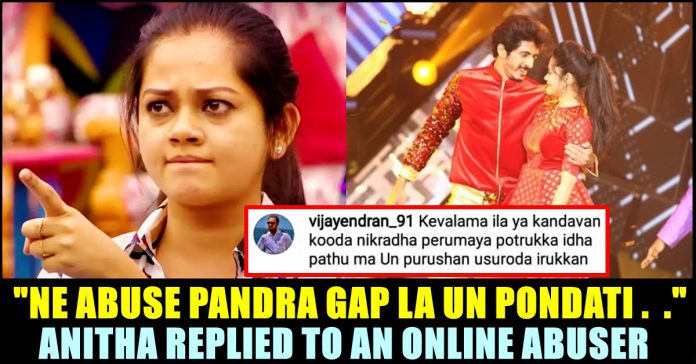 After participating in the 100 days reality game show named “Bigg Boss”, a number of participants took part in the new dance show “BIGG BOSS Jodigal” in which the male and female contestants could be seen pairing up with each other to grab the title. Vanitha Vijayakumar- Suresh Chakravarthy, Gabriella Charlton-Ajeedh Khalique, Aranthangi Nisha-Dhaadi Balaji, Anitha Sampath-Shariq Haasan, Julie-Sendrayan, Samyuktha Karthik-Jithan Ramesh, Fathima Babu- Mohan Vaidhya are the pairs for the show judges of which are actor Nakkhul and Ramya Krishnan.

Recently, Anitha Sampath, a former news reader who took part in the fourth season of the Bigg Boss show, shared a picture of herself and Shariq performing together in her official Instagram account. “Kill them with your success”.. My journey is never ending amidst of all the hurdles u (haters) create to me..next venture is this show..hope we perform this show well! With thambi Shariq” caption of her post read.

On seeing this post of her, a twitter user named Vijayendran abused her for posting the picture of herself and Shariq. Replying to him, Anitha wrote “Check your bedroom, ne insta la abuse msg pandra gap la un pondatti vera yar kudayathu.. Poranga”

When a follower asked her to ignore such derogatory comments, Anitha questioned her back asking why couldn’t they ignore the posts they don’t like. “Oruthar ah pudikala na avanga kadanthu polame” her reply read.

To a user who said that she has received less abuse compared to Archana, Anitha replied saying “Yes, I know, I can bring only one among one lakh. But at least one of two changes their mind. That’s enough” she said.

After coming out of the house, Anitha said that the female contestants who participated in the Bigg Boss show are going through huge stress due to the negative comments they are receiving from the social media users. She also made trollers to realize that they are not going to earn anything by abusing the contestants. “You will start minding your business after posting a negative comment about an individual in social media but the one who is in the receiving end couldn’t forget it for a long time. It will hurt them” she said to make people understand the mental state of Bigg Boss participants.

Update : The commenter named “Vijayendran_91” has said that his Instagram account was misused by some unknown people. He who identifies himself as an ardent follower of the Bigg Boss participant, firmly says that he didn’t involve himself in posting such comment. He also says that he sent messages to Anitha clarifying the situation.

Entire Country Mourns For The Demise Of Shane Warne!!

Along with fans, cricket experts and players from Australia, influential personalities from country India are offering their condolence message for the demise of Shane...

Mysskin Opened On How He Brought Sid Sriram To Sing “Unna Nenachu” !! WATCH