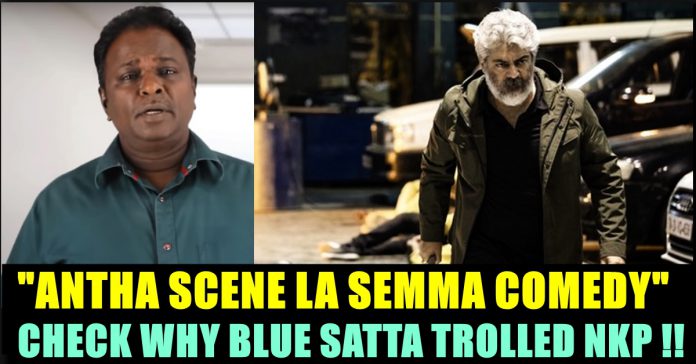 Ajith starrer Nerkonda Parvai released yesterday and receiving positive reviews from all the directions of social media. Ajith kumar was highly appreciated by his fellow actors for choosing a film like “PINK” to remake. “Sathuranga Vettai”, “Theeran Athigaram Ondru” fame H.Vinoth directed the film and the music was composed by Yuvan Shankar Raja.

Almost every reviewer of Kollywood appreciated the film except Blue Satta Maran. “Blue Sattai” Maaran is one of the prominent movie reviewers of Kollywood films. He is very well known for his rural slang, funny phrases, short stories and real life incidents in his movie reviews. For his unique style of movie reviewing, the man who always wears blue shirt has a separate set of fan following and his youtube channel Tamil talkies enjoys more than 9 lakh subscribers. 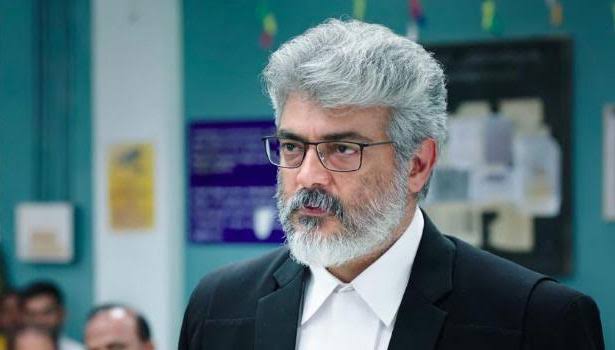 The man who is known for his funny phrases and negative reviews, thrashed “Nerkonda Parvai” for the flaws in the female characters of the movie. He also trolled the flashback portion of Ajith Kumar and Vidya Balan. “People who missed to go out in interval can go during these scenes without a second thought” says Maaran while talking about the Vidya Balan’s portion. He is not very much impressed with the with the fight sequences of the film as well.

Though he appreciated the decision made by Ajith Kumar to play the lead role in the movie as it creates awareness among vast number of audience. He also accepted the theme of the movie which is “No means No”. Maaran says that the victim characters in the movie are not very much relatable.

The movie Nerkonda Parvai portrays the struggle that was faced by three working girls after being harassed by a 3 highly influential men. Ajith Kumar who plays the role of a lawyer represents himself in court to save those girls from a wrongly accused case. Known faces such as Rangaraj Pandey, Adhik Ravichandran made their acting debut through this film.

Fans of actor Ajith Kumar couldn’t keep calm in social media as the movie released yesterday. The film is one of the highly anticipated film of the year as the actor decided to do an awareness oriented film after a long time. Many fans struggling to get tickets on the first day of the movie’s release and it continues in the second the as well.

Previous articleJUST IN : Venkat Prabhu Gets Emotional On “MAANAADU” Drop !! Check What He Has To say !!
Next articleChinmayi’s Husband Rahul Gets Emotional On Seeing The Trolls & Abuses Chinmayi Receiving !! CHECK OUT !!

Bigg Boss is the most talked about reality television show among Tamil audience since the inaugural episode of third season. Starting from Abhirami's love...

"Liger" star Vijay Devarakonda met the theatre owner who called him arrogant and blamed him for the poor performance of his recently released film...