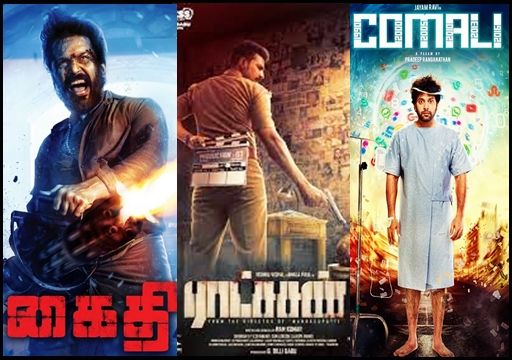 When the trailer of Akshay Kumar’s “Bachchan Pandey” got released on YouTube, many online fans of Tamil cinema wondered about the fact that Tamil cult classic “Jigarthanda” was being remade all these days. Even after watching the 3 minute 14 seconds long trailer, many couldn’t identify that it’s a remake of the Karthick Subbaraj directorial as Siddharth was replaced by Kriti Sanon and many other aspects of the film were adapted in a different way for the Hindi audience.

Many complained that majority number of  Bollywood industry’s top tier actor’s upcoming film are remakes and criticized the thinking ability of the filmmakers of the Hindi region. However, such fans must understand that every creative product is made of an inspiration. A filmmaker could get inspired by a film of another filmmaker, book of an author, incident that he witnesses or experience that he gos through. So, there’s no point in criticizing someone for getting his source.

Now, let us have a look at some of the South Indian films that are going to be remade in Hindi.

As we all know, Ajay Devgn is going to replace Karthi in the Hindi remake of “Kaithi”. Dharmendra Sharma, Ajay’s cousin is going to direct the movie, shooting of which started earlier this month.

Young and emerging Tamil filmmaker Karthick Naren’s debut film “Dhuruvangal 16” is being remade in Hindi with Varun Dhawan reprising the role of Rahman. Parineethi Chopra is going to play the female lead and the makers of the Hindi version have made few changes for their audience, says reports.

The announcement of “Thadam” Hindi remake was made before 6 or more months. Mrunal Thakur will feature alongside Aditya Roy Kapoor in the Hindi version of the double action crime thriller.

The Hindi remake of “Soorarai Pottru” is going under production with Sudha Kongara directing it with Suriya’s 2D Entertainment bankrolling. However, the makers didn’t reveal the lead actor yet. Unofficial reports say that either of Ajay Devgn, Akshay Kumar, Hrithik Roshan Or John Abraham could play the lead.

The Telugu blockbuster which starred Allu Arjun and Pooja Hegde in the lead roles is going to be remade in Hindi by having Karthik Aryan as male lead. Titled as “Shehzada”, Kriti Sanon has been committed as female lead. 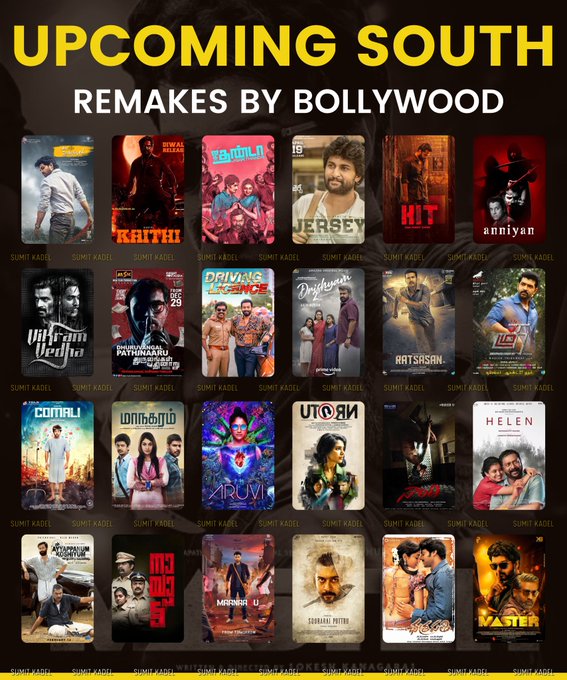 The 2018 thriller which became a massive blockbuster is going to be remade in Hindi with a title “Mission Cinderella” with Akshay Kumar playing the male lead. Rakul Preet Singh is expected to reprise the role of Amala Paul. The film is expected to release in this year.

The Arun Prabhu Purushothaman’s directorial was supposed to get it’s Hindi version by having Fathima Sana Sheikh playing the role of Adithi Balan. However, she opted out of the project due to the date issues says reports and director E Niwas is expected to sort the problems out soon.

John Abrahan has brought the remake rights of “Nayattu”, a racy thriller that got released in Malayalam film industry originally.

The Telugu film which had Naani as a failed but talented cricketer is going to get it’s Hindi version by having Shahid Kapoor in the lead role. The film is expected to hit the screens of 14th April, 2022.

Arjun Kapoor replaced “Jayam Ravi” in the Hindi version of the comedy drama which is about a patient who wakes up after 16 years due to coma. Boney Kapoor who bagged the remake rights of the film for all languages, made the announcement about the Hindi remake.

Anniyan, Vikram Vedha, HIT, Driving License, Drishyam 2, Maanagaram, U turn, Naandhi, Helen, Ayyappanum Koshiyum, Maanaadu, Master are some of the other South Indian movies that are going to be remade in the Bollywood film industry.