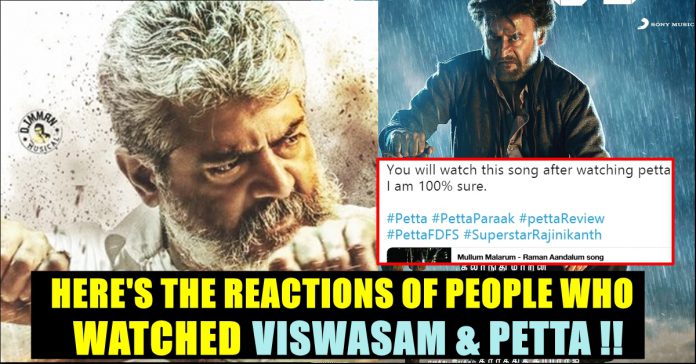 On the occasion of Pongal, South movie lovers are being treated with the pleasure of witnessing an epic box office clash between two of Tamil movie industry’s biggest superstars Rajinikanth and Ajith Kumar. After mesmerising the audience with his 2.0 version of Chitti in S Shankar’s last release, Rajinikanth is once again back in action with Karthik Subbaraj’s Petta. Petta marks the Tamil debut of Bollywood actor Nawazuddin Siddiqui. It also features Simran, Sasikumar, Vijay Sethupathi, Malayalam actor Manikandan R Achari and Bobby Simha. Rajinikanth plays an ageing gangster in the film. Anirudh Ravichander has composed the music for the film. 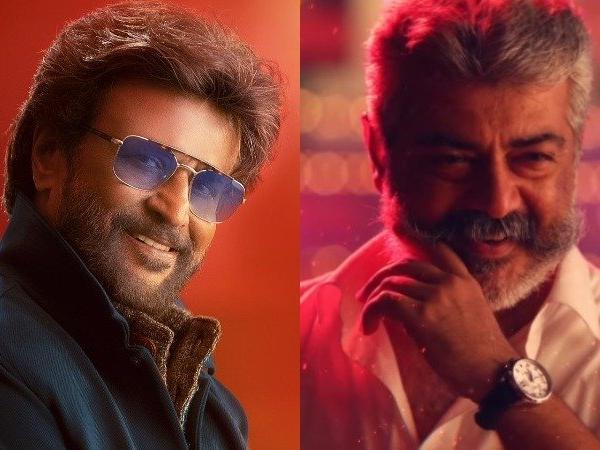 On the other hand, Ajith, who was last seen in the 2017 blockbuster Vivegam, is all set to entertain the audience with an out-and-out commercial potboiler Viswasam. The film also stars Nayanthara, Yogi Babu, Vivek, Robo Shankar, Thambi Ramaiah and Kovai Sarala among others. The film has a great buzz in Tamil Nadu and its worldwide theatrical rights have been valued at Rs 75 crore. Viswasam has been directed by Siva, who has previously directed Ajith in Vivegam and Vedalam. For the first time in 13 years, another star film is releasing along with a Rajinikanth film on the same day. While many trade analysts predicted that the two films were expected to eat into each other’s business, early reviews suggest that both movies are likely to do well at the box office. Check out some of the reactions of fans after watching Petta :

Frame by frame Rajinism is top notch !!! No one can Glorify Thalaivar like this !! Best Thalaivar film of the decade ! Thank you Karthik Subbaraj #Petta #PettaFDFS #PettaParaak #PettaReview #GetRajinified #PettaPongal

#Petta the king is back

A #Thalaivar #Rajinikanth Mass festival with a twist

It is a complete mass entertainer with high intensity dialogue and towering performances as its aces. @Hamzah_Bhuta 👍 pic.twitter.com/HYGNYJpGsv

#Petta – Perfect Package of Pongal Treat to all. Action, sentiment, Comedy, another Mass combo film from @karthiksubbaraj and team…

#PettaReview
I’m speechless…in a complete hysteric feel..@karthiksubbaraj you beauty..
There is just ONE SUPERSTAR and Its Thalaivar alone…NO ONE CAN even come close to his Charisma and Screen presence..ஆனந்த கண்ணீர்..🤩🤩🤩#PettaParaak #Thalaivar

Check out the reactions for Viswasam from the fans who watched it :

#Viswasam – Perfect Package of Pongal Treat to all. Action, sentiment, Comedy, another Mass combo film from @directorsiva and team…

Movie Filled with good Messages . Most of the scenes & sequences will connect directly with the Audience’s especially 2nd Half . Action , comedy’s , music everything worked well….! Definitely #Viswasam will be a crowd puller 🙌🙇

Whenever @directorsiva choose strong female lead, it works well with all center audiences.@tamannaahspeaks in #Siruthai & #Veeram

& Now #Nayanthara will recreate the same in #Viswasam.

#Viswasam – BEST MOVIE OF THALA l ! movie moved at a very fast pace, each and every scene is so well made. Next enanu suspense ah pogum, thala bike stunt scene is the highlight of the film. but correct intha climax varapo friend enna elupitan! -_- #ViswasamReview #PETTA #thala

#Viswasam – The only Saviour for ths movie is #ThalaAjith.
A Very Routine Predictable story and main Negative is Comedy didn’t work out. Few good fight Scene’s.
2nd Half very Slow and unwanted Flashback scenes.#Siva has wasted it again.#ViswasamFromToday#ViswasamReview

Mr.Siva – Villian of #Thala fans. Watchable in theatres once. That too only with die hard fans with the audience sound, claps and whistles. Praying to stop choosing family related scripts. #Viswasam #ViswasamThiruvizha #ViswasamReview.. Watch for #Thala

I went to the theatre with less hopes but Director #Siva you really blew my mind. A solid family entertainer with a perfect messege. throughly enjoyed it. #Viswasam #ViswasamReview

#Viswasam so many emotional scenes with a medium touch. 😅kanla thanni in many scenes. More than #thala fans family will enjoy #viswasam. The genre and movie towards climax was very touching😭. Best of #thala in recent times. #ViswasamReview #ViswasamFDFS #ViswasamThiruvizha

#Viswasam : Lack on mass & more on emotions. Easily Thala’s best performance since Yennai Arindhaal. Thankfully the script had much of scope for the actor Ajith.

Family can indulge into this movie. We have seen lot of mass moments from this combo but #Viswasam a pleasant change!

Have watched any of the two movies ?? Comment your views !!