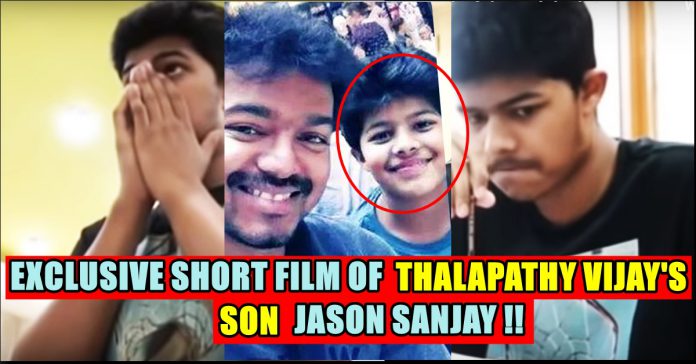 The star’s kid has taken the internet by storm earlier with his short film Junction. Sanjay, the 18-year-old son of Ilayathalapathy Vijay, has worked on a short film before, and it was released on Internet few days ago. Goes without saying, the film has become instantly popular with Vijay’s fans.

The youngster has always shown interest in acting and has even played a cameo in Vijay’s hit film Vettaikaran. Having a lot of his father’s resemblance, he also did the lead role in the 6 minutes 51 seconds short film. Now, Sanjay released another short film in his Youtube channel. The film named as “SIRI” has duration of 4 minutes and 25 seconds. The whole was shot in London it seems which was added in the description of the video. Jason shows a strong resemblance to Vijay in his acting style and screen presence.

The video starts with a follow shot in which Sanjay carries a bag and settles in a place to attend a call. From the very next scene he goes invisible to everyone. Realizing this while seeing himself in the mirror, Sanjay gets excited. Then he starts to terrorize his friends with his super power. When he goes to staff room and starts malfunctioning by correcting his own exam papers with extra marks.

When a faculty enters the room, he calls out Sanjay’s name loudly and the short film ends by Sanjay dropping the pen in his hand.

The end credits of the short film shows that it was directed by Jason Sanjay. Jason Sanjay was born in London to the famous couple of Kollywood Vijay and Sangeeta Sornalingam which makes him the grandson of Kollywood veteran filmmaker S. A. Chandrasekhar and Shoba. He has a sister named Divya shasha. He made a special appearance with his father in “Nan Adicha Thanga Maata” song in the 2009 Tamil film Vettaikaaran. Jason Sanjay was graduated in Applied Information Sciences (AIS).