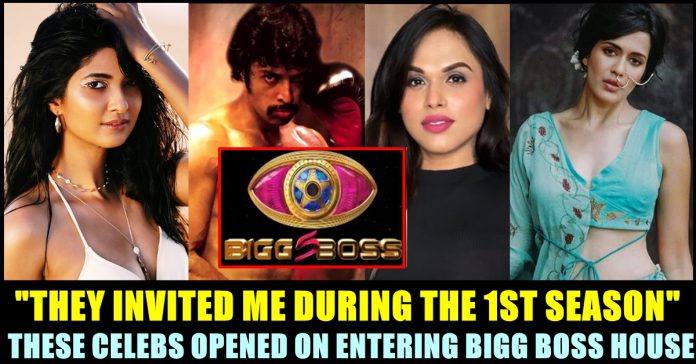 Promotional videos starring Ulaganayagan Kamal Haasan started surfacing in the official social media handles of Vijay Television ahead of the fifth season of the Bigg Boss show. Brushing off the rumours on the change of host, Kamal Haasan has been nailing it with his same old charm and looks in the promos. However, speculations on the 15 plus celebrity contestants are doing rounds in social media platforms. Among the many, some of the celebrities who were subjected to the buzz on participating in Bigg Boss show, has reacted. “Sarpatta” fame Santhosh Prathap, Shakeela’s daughter Mila, Keerthy Pandiyan, Actress/Model Pradaini Surva has reacted to the buzz.

Season 5 of the most awaited reality game show Bigg Boss Tamil is all set to be inaugurated from the end of September month or the beginning of October. After the release of two main promos, questions about the 15 plus celebrity contestants who are going to take part is being unanswered still and speculations about the same is being made across the Internet. Many media portals came up with a list of celebrities who could participate in the cash rich show.

Actor Santhosh Prathap who rose to fame among cinema audience through Pa. Ranjith’s “Sarpatta Parambarai”, said that he is not going into the Bigg Boss house as he started getting opportunities to act in movies. “I was invited to take part in Bigg Boss show in the first season but I refused as I didn’t know about the show at that time. Rumours about me getting into the house kept surfacing for the third and fourth seasons. I felt happy for the free promotions” said Santhosh and clarified that he is not going into the house.

“I was supposed to go to “Survivors” show but I took break after “Sarpatta”. As I started getting good projects, I dropped the idea of participating in the show as well” Santhosh said. Actress Keerthi Pandiyan also denied the rumours on herself participating in the show. The actress said that her mindset might change in the future and confirmed that she is not going to take part this season.

Shakeela’s daughter Mila said that the decision of herself taking part in the show completely depends on her mother. “I am not planning for anything. I would feel happy if I get into the house” she said. Actress Suzane George who is known for her presence in Prabhu Solomon’s “Mynaa”, shared a post which said that she going to enter the house as a contestant by adding a heart emoji.

Actress Pradaini Surva released a video in the timeline of her Instagram account, confirming about her non-participation in the show. “Thanks for all the love! I will be right here asking “have you ?” And sipping coco water 😉” read her caption. Check out her post below :

Previous article“Don’t You People Get Bored ?” – Girl !! Check How Priya Replied
Next article“They Refused To Give Rs. 3 Lakh To Me As Salary After My First Film” – Vijay Sethupathi Opened

Famous Television actress Devi Priya, in her recent interaction with a youtube channel, revealed that casting couch exists in television and cinema industry. The...

After a customer from Guwahati who owns an Ola S1 Pro electric vehicle alleged that his son met with an accident and suffered severe...