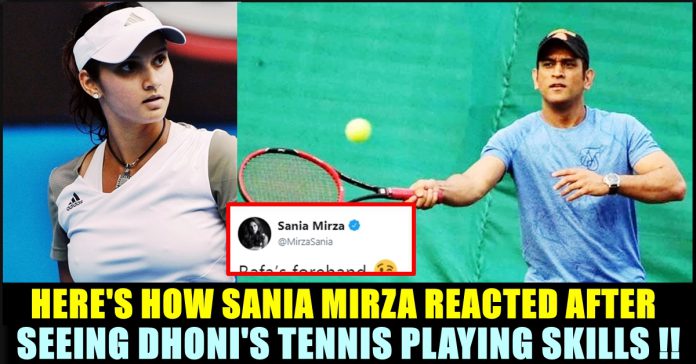 Virat Kohli’s Team India reached London on May 22 for the 2019 Cricket World Cup which starts on May 30. Before the first warm up game against New Zealand on Saturday, Many pictures and videos of the Indian players practicing and having fun in London soil keeps surfacing in social media.

MS Dhoni was the mainstay in Chennai Super Kings’ batting line-up as he managed to score 416 runs in only 12 innings. His work behind the stumps also worked out very well throughout the tournament and is expected to continue in this biggest ICC tournament. Now the veteran has been captured while playing tennis in the practice session and asked which would be the tennis equivalent of helicopter shot by ESPN cricket page.

Sharing the picture ESPN cricinfo added a caption saying “What would be the tennis equivalent of the 🚁 shot? 🤔”

What would be the tennis equivalent of the 🚁 shot? 🤔 pic.twitter.com/Y0rfHtbMH3

Many came up with various kind of answers to the post but the top opinion of all came from a Tennis legend. Sania Mirza, a former world No. 1 in the doubles discipline, compared Dhoni’s helicopter shot with Rafael Nadal’s popular forehand shot.

The Rafael Nadal forehand is considered as one of the fiercest forehands in modern tennis and this contributes to his wins and many titles. He hits a strong and powerful topspin forehand and as the result, a very sharp brushing effect is created as the back of the ball comes in contact with the racket head.

This answer from Sania excited many of followers who got instigated who post many of their opinion of Dhoni’s helicopter shot being comapred to Rafael Nadal’s forehand. Check out some of them here :

Rafa. Because the Top spin of Rafa’s forehand is so strong that Roger shit in his pants.

I just played it in my head… so true

How on earth it is like Rafa’s forehand, Rafa is left handed.

It’s must be Roger’s forehead

What would be the tennis equivalent for this shot? 😋 pic.twitter.com/jHAUjwQ7uG

However it is heartwarming to see fellow sports people of India complimenting each other. According to a recent report of Hindu, Six-time Grand Slam champion Sania Mirza is embarking on yet another comeback. Known to fight against all odds, on and off the court, the 32-year-old Sania has resumed training in earnest after the birth of her son.

As far as Cricket world cup0 is concerned, Indian Cricket Team will depend heavily on the batting prowess of the top order batsmen, all-round capabilities of Hardik and Vijay Shankar and MSD’s brilliant cricketing brain.

What do you think on this opinion of Sania ?? Comment your views below !!