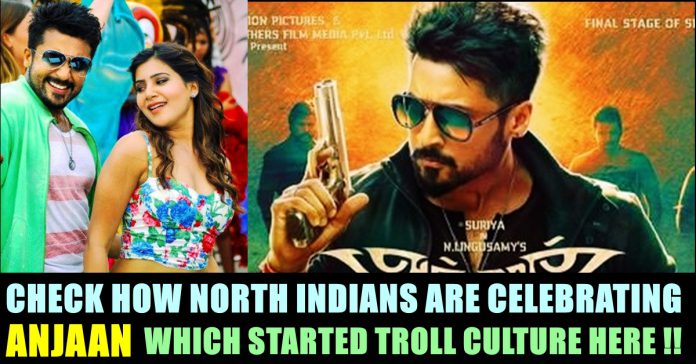 Anjaan, a 2014 released film of Suriya and Samantha is a box office dud in Kollywood. Now, a report on how the cinema fans of Bollywood embraced the action thriller has been surfaced. The film which was released with much anticipation among the Tamil fans, failed to impress them in big time. the film was directed by one of the prominent filmmakers of Kollywood and was produced by himself under his own banner “Thiruppathi Brothers”.

The teaser and the trailer of the film was highly lauded by fans but the level expectation they created backfired the makers after the theatrical release. Arguably, the film started the troll culture in Tamil meme nation after failing to meet the expectations of Tamil audience. The speech Linguswamy gave during the film’s pre promotion, was severely trolled by the users of internet at that time. Linguswamy, in one of an interview said that he made the film with all the tricks he learnt in his cinematic career. “Kathukita Moththa Vithayum Muzhusa Erakkanum Nenachiruken” he said in that interview which turned out to be a troll material after the release of the film.

“Anjaan” revolves around a gangster named as Raju Bhai played by actor Suriya. The film involved biggest names of Indian film industry such as Manoj Bajpaee, Santhosh Sivan, Vidyut Jamwal, Samantha, Yuvan Shankar Raja etc. The story is based on Raju Bhai taking revenge on the bad people who killed his friend Chandru. The film released on 15th August of 2014.

The film opened to negative reviews, with some praise for Suriya’s performance and the score, but criticism of its length, the placement of songs, the screenplay, and the plot. Baradwaj Rangan who was working with Hindu at that time wrote ” It runs a posterior-numbing 170 minutes, and there isn’t one surprising moment — not one line of dialogue worth recalling, not one tune worth humming, not one action sequence worth upping the pulse for , not one juicy character worth caring about. Audience felt the same as the film performed bad at the box office.

Now, to our surprise, the film which was dubbed and released in Youtube became a massive hit with 140 million views. Titled as Khatarnak Khilladi 2, the film is currently streaming in a youtube channel named as Goldmines Telefilms which enjoys nearly 40 million subscribers.

Tamil producer Dhananjayan who is known for producing films such as “Mizhi”, “Chandramouli”, said that each market reacts in a different way, on seeing the viewership the film received online. “Everyone ran down our #Anjaan by director Linguswamy sir with Suriya sir. Look at the Hindi viewership of the dubbed version #KhatarnakKhiladi2 … 140 Million+ views. Each market reacts in a different way. Good learning though” he wrote in his tweet.

Everyone ran down our #Anjaan by @dirlingusamy sir with @Suriya_offl sir. Look at the Hindi viewership of the dubbed version #KhatarnakKhiladi2 … 140 Million+ views. Each market reacts in a different way. Good learning though ✍️✍️✍️👍👌 pic.twitter.com/XAXmCIBB13

Suriya fans became extremely happy on knowing about the fact and celebrated it by trending hashtags in Twitter. Comment your views on “Anjaan”. Have you changed your opinion about the film now ??

A Follower of "Cooku with Comali" show named Arunkumar Arivukalanjiyam, came up with a post in his Facebook handle, reacting to the trolls that...

Dinesh Karthik Strikes Again With His Tamil !! MUST WATCH

Dinesh Karthik who has been impressing the Tamil speaking followers of IPL tournament with his one liners from behind the stumps, yesterday, went one...