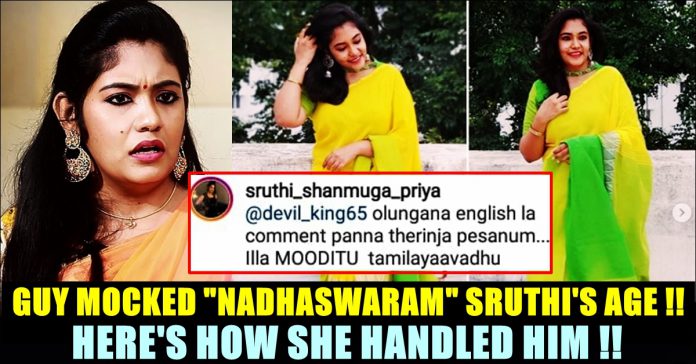 Not knowing what to do in this lockdown restriction, most people who has nothing to do anything productive in their homes are glued to the Internet, especially to the social media platforms to kill time. They who are interested in following their favourite TV and cinema celebrities to know about their daily routines, sometimes would throw a shade on them for no appropriate reason. To avoid negativity, most celebrities would turn their comment sections off for their social media posts and would never turn back but there are few celebrities who would immediately give them back, in order to make them taste their own medicine.

Be it Prime minister Narendra Modi or Superstar Rajinikanth, online trolls and criticisms never spared anyone. Along with the constructive criticism, mindless trolls are also occupying a certain space in the social media platforms. The most recent one to become the victim of mindless online mockery is Tv actress Sruthi Shanmuga Priya. She who got her face recognised among the tamil TV audience by appearing in director Thirumurugan’s SUN TV serials, is also active in the photo posting social media platform. She currently enjoys 77 thousand followers there.

One day the energy will be reciprocated without being requested and you won't feel so drained…! Wait for it…. 💜 #selfmade Captured by : @studione8 Makeup : @charmingbridesbysd Accessories by @ishhaara For @thelabelritika

Shruthi recently uploaded a series of pictures of herself in a yellow saree. The actress who looked elegant in those pictures which were captured in her terrace, carried a subtle smile in all of them. “Life is colourful ! 🌈 Make it more intense by mixing the shades 💫” she wrote as a caption to her post.

On seeing this post, one of her follower named as “Devil King” tried to mock the actress. Through the comment he/she made, we could vaguely understand that he is asking when Sruthi is going to have her 60 years marriage in a way of trolling her for appearing in serials for a long time. He further said that he saw her in TV during his childhood and wrote “still u r upload single photo aunty” only to get a befitting reply from Sruthi.

Sruthi asked him to comment in proper English or in Tamil at least in first place. “Why are you involved in these kind of things when you can’t even post a comment properly ? I am not worried of being a single but seeing half baked people like you commenting in my post is what I can’t tolerate” she wrote.

Comment your views on this reply from the “Bharathi Kannamma” actress !!

Previous articleProducer Xavier Britto Replied To The Audio Launch Trolls !!
Next article“Jagame Thanthiram” To Be Released In OTT ??