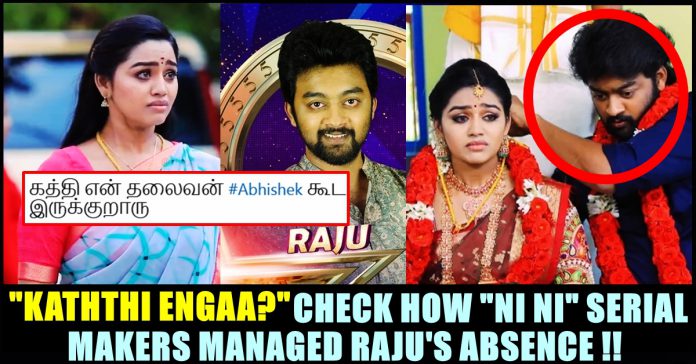 Raju Jayamohan of “Kana Kaanum Kalangal” fame has gained a separate fan following through his Bigg Boss stint in a very short span. Not only his timing comedies and instant one liners along with mimicry abilities impressed viewers but also the way he handles his co-contestants won hearts. His calm and composed nature even while contestants such as Abishek and Priyanka intimidate him made audience to conclude that he will definitely be one of the top contenders for the Bigg Boss title.

Raju who likes to introduce himself as an assistant of legendary filmmaker K. Bhagyaraj, was acting in a serial named “Naam Iruvar Namaku Iruvar” in Vijay TV prior entering the house. In the serial, he was acting as the protagonist’s friend “Kaththi”. Now, as the aspiring actor entered Bigg Boss house, makers of Nam Iruvar Namaku Iruvar came up with a scene to make up the absence of him.

Through one of the recently released promo, “Ni Ni” makers tried to convey that “Kaththi” flew to Dubai without informing his closest friend, Maayan. His wife, played by Gayathri, could be seen crying to his elder brother and Kaththi’s friend Maayan. Adding the promotional video, caption of Vijay TV said “He would have hid about his Bigg Boss entry as you people would leak it to the audience”. “பிக்பாஸ் வீட்டுக்கு போறேன்னு சொன்னா நீங்க leak பன்னிடுவீங்கன்னு சொல்லல போலார்க்கு! 😀” the caption read.

Check out the promo below :

“Kaththi should have stayed in this serial, He got caught with that Abishek Raaja and is suffering” a viewer commented in a funny note and another one said “He is stealing coins in Bigg Boss house”. Check out some of the reactions below :

“I Would Have Raped Mammooty, If I Was A Girl” Says Mysskin On Public Stage !! Watch Video !!

Director Mysskin's rape joke at the audio launch of Peranbu in Chennai on Sunday, comes as a new low, even as film industries across the world...

Former English cricketer Nick Compton deleted his tweet about Kohli after facing severe backlash from fans of Indian cricket team. After the end of...

Details On KV Anand’s Last Project Are Out !! Will It Materialize ??

Details on the project of late director KV Anand was planning to do with actor Simbu got surfaced in Internet. The film was supposed...