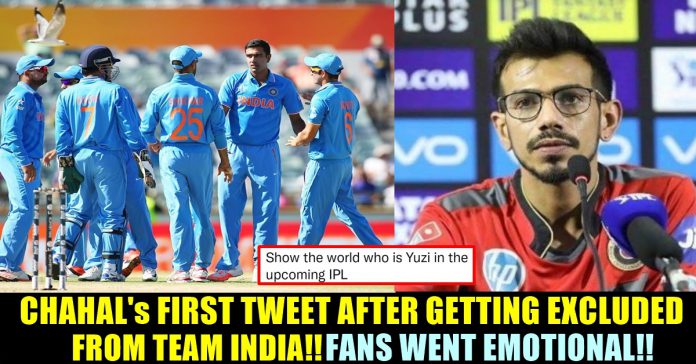 Chahal’s First Tweet After Getting Excluded From Team India!!

Yuzvendra Chahal has posted a tweet on Twitter after being excluded from the World Cup Indian Team. This tweet has gained the attention of many because of his caption.

As the Indian Premier League is nearing the players are going to UAE. Every team is actively posting its team players’ arrival. Royal Challengers Banglore has posted their welcome note for Yuzvendra Chahal.

A splash of magic has just landed in UAE to join the RCB Fam. 🤩

After the release of the list by the Board of Control for Cricket in India (BCCI), Yuzvendra Chahal has shared a tweet for the first time. He has captioned the tweet with emojis.

His caption has been explained by many people in the comment section. Some have even told that he has imitated Rohit Sharma who posted the same caption in words in the year 2018 when he wasn’t included in the Test series.

Sun is covered by cloud now, he will come out bright one day…. concentrate on this IPL performance l, never know some injuries could bring into the squad.

Play the best cricket pf your life till 10 oct. not to prove anyone. I don’t think you’ll now be called for this world cup but you can just plant that thought in their mind that what are they missing on. Good luck brother. I know this is your last year with rcb too.

All the best for IPL brother. You're still the best indian spinner in the shorter format of the game. Do well! ❤️

Meanwhile other Spinners in the Squad…😌 ___U have time till Oct 10 Yuzi Prove YourSelf…@imVkohli @BCCI #IndianCricketTeam #Cricket #WCT20 pic.twitter.com/h4J483sNEQ

I still believe dropping @yuzi_chahal was the wrong idea yesterday. He could have made it into the squad easily, in fact into the #final15. But don't worry SUN WILL RISE AGAIN @imVkohli @RCBTweets @BCCI

Playing for a failed Club, failed captain. This is y the promising career went crashing down. Leave @RCBTweets and revive it.

Pls give hundred runs in 4overs in every matches now on bcoz virat doesn't deserve u champ..😢