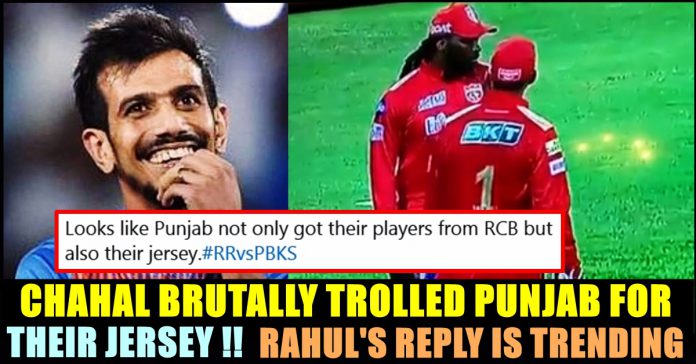 After Royal Challengers Bangalore trolling Punjab Kings for their news jersey colour and pattern being similar to their old one, now, RCB player Yuzvendra Chahal came up with a video to troll KL Rahul and Gayle who played for RCB once. Uploading a video of Gayle and Rahul discussing in the match that took place on Monday, Chahal welcomed the duo to RCB team to troll their jersey colour. The tweet garnered huge reception and surprisingly KL Rahul, captain of the Punjab kings team made a humorous reply as well.

The Punjab based IPL team changed their team name from Kings 11 Punjab to Punjab Kings and hoped for fortunes by changing the colour of their jersey. When the players of Punjab Kings entered the field for the first time in their first match against Rajasthan Royals on Monday, fans couldn’t resist wondering their jersey colour being a similar one to RCB team’s old one.

Imagine yourself wearing this 🤩 jersey! 👕

Few fans in social media also pointed out the similarities between Punjab Kings’s jersey and RCB’s old jersey which also had the gold and yellow combination. To our surprise, Punjab Kings were also sporting golden helmets in IPL 2021 season. If this is not enough, three prominent players of Punjab which includes KL Rahul, Chris Gayle and Mayank Agarwal represented RCB in the past which also strengthened the connection between the two teams.

“Is it only me or does anyone think, Punjab jersey looks a lot like the 2008 RCB jersey” wrote a social media user to express his opinion whereas many other fans posted similar comments. Check out some of them below :

Is it only me or does anyone think, Punjab jersey looks a lot like the 2008 RCB jersey 🧐#RRvPBKS

We all talked about Punjab being RCB dropout, they literally have a similar jersey like RCB. Red and Good. 🤷‍♂️

Mayank and KL opening in 2009 RCB jersey??? Feel like I'm going back in time

Looks like Punjab not only got their players from RCB but also their jersey.#RRvsPBKS pic.twitter.com/5Kl46yyd5Y

What topped all such tweets is the tweet of Yuzi Chahal who uploaded a video of KL rahul and Gayle to write “Welcome to RCB boys” and tagged the duo by adding laughing emojis.

His tweet garnered 27 k plus likes in no time and KL Rahul came up with a reply asking Chahal and his team to wear their away jersey on 30th of April to avoid confusion as they are going to compete each other on that day. “Wear your away jersey on the 30th” said Rahul and laughed. It is very well known that RCB team would change their jersey at least for one match every season to create awareness for any kind of social causes.

Wear your away jersey on the 30th 😂 @yuzi_chahal

Previous articleAishwarya Rai’s Look Alike Got Irritated On Seeing These Comments From Public !!
Next articleUdhayanithi Stalin Pointed Out The Logic Loophole In “Karnan” !!

Selva Raghavan’s Emotional Message On The Demise Of Bala Singh !!

We all have scene him in many movies but his performances in the movies of Director Selvaraghavan were highly recognised by audience. Bala Singh...