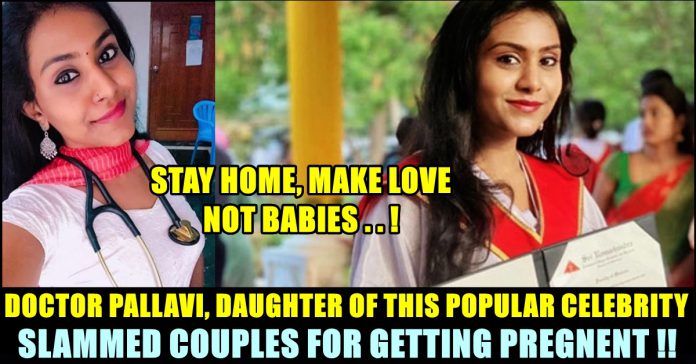 Celebrity’s Daughter Takes Dig At Couples For This Reason !!

Pallavi Agarwal, a doctor by profession is a daughter of popular Tamil folk singing couple Pushpavanam Kuppuswamy and Anitha Kuppuswamy. Being a Tamil folk singer, lyricist, writer and music composer of Tamil folk art, He has been credited for reviving the Naatupura Paatu a Tamil folk art. Together with his wife Anitha Kuppusamy, he has conducted several music concerts of Tamil folk songs. Kuppuswamy is also a playback singer. The couple have together brought out several albums of authentic Tamil folk music. The couple also collaborated together with Tamil film industry through some hit songs. They have sung for leading music directors of Kollywood such as Ilayaraja, Vidya Sagar, Yuvan Shankar raja, G.V Prakash, Devi Sri Prasad etc.

Now, Pallavi Agarwal whose Facebook says that she is a Local Officer of Public Health – Tamil Nadu at Medical Students Association of India, has came up with a post mocking people who are getting pregnant at this time. Her post was written in a way of slamming people who are quarantined due to the coronavirus lockdown.

The Coronavirus which killed more than 64,000 thousand people across the world, acting as a serious threat for world countries. The governments of the many countries ordered its citizens to stay home in order to avoid the community spread which will cause more damages. In India, people are required to stay home till April 14 and the lockdown period is likely to get extended. The requirement of professional doctors is increasing day by day due to the disease.

To kill the boredom, people are involved in many activities such a working out at home, reading books, watching films/series etc. Now, Pallavi Agarwal came up with a post slamming people who are making babies to kill time. Being a doctor herself, Pallavi, who got fed up seeing so many pregnant patients during this crucial time, asked “Enna da Panringa?” targeting the public people with a facepalm emoji.

“Stay home, stay safe, make love, not babies! So many preggy patients 🙄 Enna da panringa 🤦🏻‍♀️” read her post which is receiving various kind of reactions from the users of Facebook.

Pallavi Agarwal, few months ago, released a video to clarify regarding a rumour which said that got kidnapped. Check out some of the reactions her post is receiving :

As far as the coronavirus is concerned, Tamilnadu has reported 485 positive cases as of the evening of 4th April. Currently, state Tamilnadu holds the top rank in India with highest number of positive cases. So far 4 people have died in the Tamil speaking state, according to reprts.

Previous articleOla Asked The Customers To Donate For The Drivers !! Internet Reacts
Next articleAjith’s Heroine Got Slammed For Her Workout Video !! Check How She Replied

Tamil Actress Blamed Youngsters For The Collapse Of Gujarat Bridge!!

On Sunday, more than 140 people died after a bridge in Gujarat's Morbi got collapsed. It has been reported that the bridge was opened...