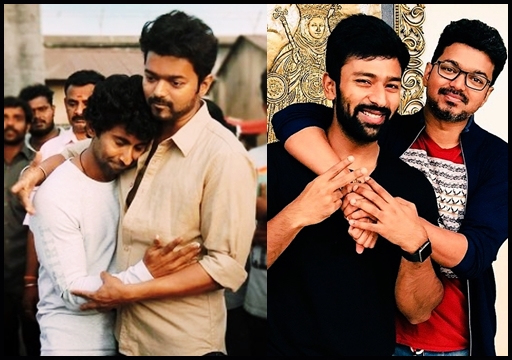 Master Mahendran who is known for acting in Tamil films since childhood, replied to a fan who said that celebrity Vijay fans are failures. The twitter user dropped the comment after Mahendran shared a picture of himself with Vijay during the shoot of “Master”.

Known for predominantly appearing in Tamil films, Vijay was last seen in “Master” directed by Lokesh Kanagaraj. The actor who debuted 27 years ago in the Tamil film industry, influenced enormous number of youths and kids through his onscreen presence. Several fan clubs are being operated across the state only to celebrate him.

Apart from fans from public, celebrities from kollywood industry also have expressed their admiration towards the actor. Shanthanu, Sibiraj, Jeeva, Udhayanithi Stalin, Amritha Iyer and many other actors identified themselves as Vijay fans.

Master Mahendran who shared screen space with Vijay in his film “Minsara Kanavu” as a child artist, had an opportunity to feature in his recently released “Master” as well. Recently a fan shared a shooting spot picture of Mahendran hugging Vijay and tagged the latter in the micro blogging social media site.

“Thambi love ❤” Mahendran wrote while sharing the picture in his twitter timeline. Chevk out his post below :

Reacting to the post, a twitter user named “Thanga Thalapathy” said that actors whoever identified themselves as Vijay fans got failed to prove. “Establishing you are Vijay Fan? Ok here is the data.!! Top failure actors. Shanthanu, Sibiraj Now joining Master Mahinderan. Congratulations 🎉” read his comment.

Establishing you are Vijay Fan?

Mahendran who saw the negative comment, didn’t turn blind eye as he came up with a reply which became a banger. Laughing at the comment of the toxic twitter user, Mahendran said that he will come to know about him in the future. “Hahahaha 😂😂 நான் யார் என்று உங்களுக்கு எதிர்காலத்தில் தெரியும் 🤙🏻” read Mahendran’s reply.

Many supported Mahendran morally after seeing his reply and few asked him tot ignore negativity as well. On the work front, Mahendran is expected to be seen in “Maaran” of Dhanush which was directed by Karthick Naren. “Amigo Garage”, ” Ripubury”, “Kara” are some of his other films which are going through various stages of production currently.

Ever Tried Baahubali Sandwich, Syringe Pani Puri, Paan Milkshake? : This Cafe In Kilpauk Serves Them All!!