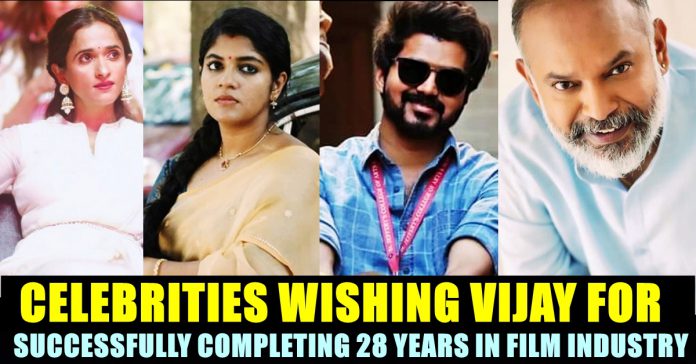 Actor Vijay who is fondly called as “Thalapathy” by his fans and followers has successfully completed 28 years in Tamil film industry. This achievement of the actor is being celebrated by his fans with common display pictures and write ups. Along with fans, a number cinema celebrities are also wishing the actor on this special day.

Vijay debuted through “Naalaya theerpu” in the year 1992. After struggling to gain a separate space among the audience for a long time, the actor’s breakthrough came from the 1996 love drama “Poove Unakkaga”. After proving himself as a romantic hero through films such as “Kaadhaluku Mariyadhai”, “Love Today”, “Kushi”, “Priyamaanavale” etc, Vijay got himself involved in doing action films.

Films such as “Thirumalai”, “Gilli”, “Thiruppachi”, “Sivakasi” helped him to gain the mass appeal he wanted. His collaboration with directors A.R Murugadoss and Atlee made him the star. His upcoming film “Master” with Lokesh Kanagaraj is the most awaited and is expected to bring back the audience to the theatres.

Check out the posts uploaded by other celebrities :

Here is the Spl Design from Kerala Fans @KVFC_OfficiaI

Glad to release the Special Design for 28Yrs of Thalapathism ❤️

28 Years since the begin of THALAPATHY Era🌟,Wow what a journey Mappi @actorvijay from illaya thalapathy to " THALAPATHY " Waiting for @Dir_Lokesh Sambavam !!

Thank U Thalapathy for giving such people to shower love upon us n for d 28 yrs of absolute entertainment🔥#28YearsOfBeIovedVIJAY pic.twitter.com/C2E89JNoPO

On the work front, the actor is expected to join hands with “Kolamavu Kokila” fame Nelson Dileepkumar. A film with director Vettri Maaran is also on cards.

Previous articleAnchor Maheshwari’s Fitting Reply To An Insensitive Comment Of A Man !!
Next articleAnitha’s Husband Hinted About Her Elimination ??

Forget Kollywood Celebrities, This Busy Cricketer Very Much Impressed With PETTA !! Check Out !!

Superstar Rajinikanth's latest film Petta, which has been directed by Karthik Subbaraj, released worldwide on Thursday. The movie has been produced by Kalanithi Maran...