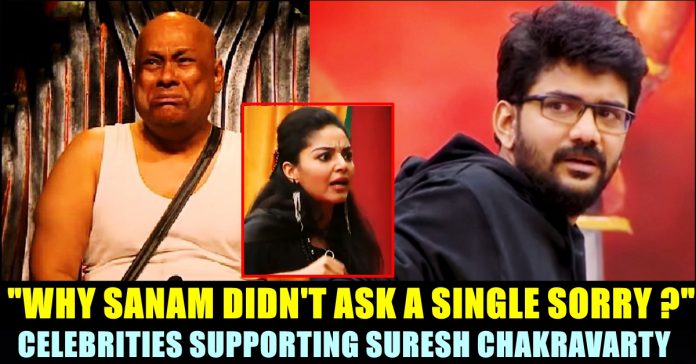 In a task provided by Bigg Boss contestants were required to disguise as demons and royals. The king family were supposed to stay calm when the monsters try to make them as slaves by distracting them. On Wednesday episode, a fight broke out between Suresh Chakravarty and Sanam shetty while performing the task.

While performing the task, Suresh, accidentally hurted Sanam with a fake iron without knowing it was her. This didn’t go well with Sanam who scolded Suresh severely and called him out in a disrespectful way. The housemates who felt the tension in the house tried to cool her off. Archana, the wild card entrant made Suresh to apologize to Sanam several times for hurting her physically.

Dejected Suresh went to the confession room and asked Bigg Boss to evict him permanently for the way he behaved on that day. Bigg Boss asked Suresh whether he did anything with his knowledge and Suresh replied by saying that he didn’t do it intentionally. Bigg Boss suggested Suresh to continue the game and reminded him that people are watching.

On seeing the episode, people started expressing their opinion in the social media platforms. Some supported Sanam and said that Suresh is targeting her from day 1 whereas others blamed Archana for not making Sanam to apologize to Suresh for disrespecting him. Kavin, former Bigg Boss contestant supported the old man and posted a tweet writing “May the force be with you. Suresh Chakravarthi sir.. !”

May the force be with you #SureshChakravarthi sir.. !

Actor and grandson of legendary actor Siva Ganesan, Shiva Kumarr who has been observing the show expressed his disappointment over Archana and questioned whether she is a contestant or Bigg Boss. He also asked why Sanam didn’t apologize to Suresh for disrespecting him.

I just finally want to ask one question for sanam!!The poor thing might have lost her eye! After suresh sir apologized ,why can't sanam ask sorry for calling him in irrespective words! She didn't even feel for those words! #BiggBoss2020 #BiggBossTamil #BiggBoss4

Veteran actress Sri priya also posted similar opinion about the episode that streamed on Wednesday. She predicted that Archana has watched the previous episodes and entered the house with a plan. She who felt that Archana was rude to Suresh, questioned why she didn’t make Sanam to apologize to Suresh for the way she disrespected him.

Many other people posted tweets supporting Suresh and said that sanam is overreacting for getting hit by a thermocol like product.

He was such a strong person but very sad day to #sureshchakravathy #BiggBossTamil4 #SanamShetty pic.twitter.com/zr5RDVjTmd