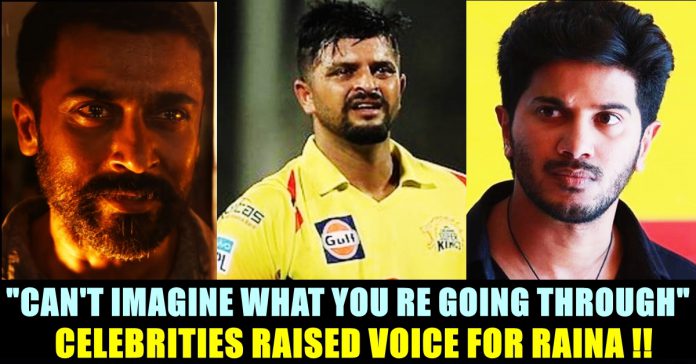 As soon as Raina posted a couple of tweets reporting about the crime committed by miscreants against his family members, many influential personalities including cricketers and actors across the country raised voice for him. Actors Suriya, Dulquer Salman along with cricketers Ishant Sharma, Praghyan Ojha and many others expressed their condolences for the deceased members of Raina’s family.

Amidst the various speculations among fans regarding the immediate exit of the left handed batsman, the cricketer came up with a couple of tweets requesting Punjab police to look into the heinous crime that caused the loss of two lives in his family.

Check out his tweets here :

Till date we don’t know what exactly had happened that night & who did this. I request @PunjabPoliceInd to look into this matter. We at least deserve to know who did this heinous act to them. Those criminals should not be spared to commit more crimes. @capt_amarinder @CMOPb

As soon as the tweet of this cricketer surfaced, actor Suriya came up with a tweet expressing his condolence. My deepest condolences dear Raina. we all shoulder your grief! Let the heartless criminals be summoned to justice!! My prayers for strength and peace.” Suriya wrote in his tweet.

My deepest condolences dear @ImRaina we all shoulder your grief! Let the heartless criminals be summoned to justice!! @CMOPb @capt_amarinder @PunjabPoliceInd My prayers for strength and peace. https://t.co/y3SeQJpMEO

Check out how other celebrities supported the 33 year old cricketer :

So sorry for your loss bhai ! Cannot imagine what you and the family is going through. Prayers and strength to all of you in these trying times.

I am so speechless, Stay strong Raina bhai 🙏🏻 @ImRaina

Stay strong Chinna Thala, all the #yellove to you and the family. 💛

On 29th of August, it was announced that Raina is leaving UAE due to personal reasons. It was said that he will no longer be available for the whole tournament of IPL. This left fans dejected as speculations started surfacing about the reason behind his exit. The latest interview of CSK owner N Srinivasan added fuel to the speculations. Read : “Raina’s Contribution To CSK Is Phenomenal” Said N Srinivasan !! Fans Not Happy

Earlier, reports emerged saying that Raina’s uncle has died followed by a midnight attack in their Pathankot’s Thariyal village while his aunt is critical. The report also mentioned that the attack was carried out on the night of 19th of August 19 when the family was sleeping on the terrace of their house.

However, the miscreants are still could not be identified. The attackers reportedly used lethal weapons against the family when they were sleeping. “It is being said that Asha Devi, sister of Raina’s father is fighting for her life in the hospital, while his uncle identified as 58- year old Ashok Kumar died in the attack.” reports updated. Suresh Raina’s cousins Kaushal Kumar and Apin Kumar have also attained injuries during the violent attack and one of them died as per Raina’s tweet.

After all the furore that was created by the issue of Rajinikanth with the Madras high court, the actor now, came up with a...