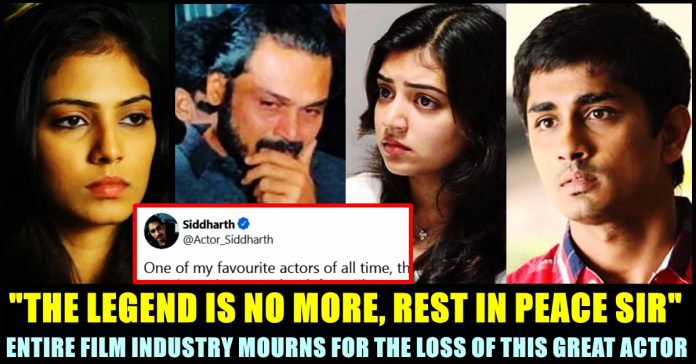 Celebrities Mourning For The Demise Of This Veteran Actor !!

Nazriya Nazim, Manju Warrior, Malavika Mohanan, Fahad Fazil and many other south Indian cinema celebrities mourned for the demise of veteran actor Nedumudi Venu who is known for acting in more than 500 movies throughout his career. On Monday, he died at a private hospital in Thiruvananthapuram. It has been reported that he had been in a critical condition for some time due to liver-related ailments.

Beginning his career as a theatre artist, Nedumudi Venu made his film debut in the year 1978. He is known for playing important roles in director Shankar’s films such as “Indian”, “Anniyan” etc. Throughout his career, Venu has gained many admirers as he excels in handling serious and comedic roles effortlessly. The actor who left world at the age of 73, had won three national film awards and six Kerala state awards for his acting performances.

Many stars of South Indian film industry came up with posts mourning for the demise of Nedumudi Venu. “Farewell Venu uncle! Your body of work and your expertise over the craft will forever be research material for generations to come! Rest in peace legend! #NedumudiVenu” said actor Prithviraj Sukumaran in his tweet to pay last respects for the actor.

Farewell Venu uncle! Your body of work and your expertise over the craft will forever be research material for generations to come! Rest in peace legend! #NedumudiVenu pic.twitter.com/VzZ4LF49Nq

Actress Nazriya Nazin shared a post of her brother-in-law in which he shared the picture of the younger version of Nedumudi Venu.

“I consider myself incredibly lucky to have been able to work with this masterclass of an actor and just the most wonderful, loving human being. Charlie and now Puzhu, just before he’s left us. What a terrible loss. I salute his artistry and carry within me the incredible fervour for the craft he’s instilled in me as an actor through his work.” actress Parvathy said in her post.

“Nedumudi Venu sir, an exemplary actor is no more with us. His legendary craftsmanship and body of work is a culmination of decades of dedication to the art of acting. RIP sir.” actor Karthi said in his tweet.

Nedumudi Venu sir, an exemplary actor is no more with us. His legendary craftsmanship and body of work is a culmination of decades of dedication to the art of acting.
RIP sir. pic.twitter.com/zJs6i1bmUu

“Malayalam cinema will never be the same again, One of the finest actors to have graced our screens. RIP Nedumudi Venu sir” actress Malavika Mohanan said through her Instagram story and Twitter handle.

Malayalam cinema will never be the same again 💔
One of the finest actors to have graced our screens. RIP Nedumudi Venu sir 💔 thank you for the cinema ♥️ pic.twitter.com/jmSrWTtQpM

Check out some of the posts of other cinema celebrities :

One of my favourite actors of all time, the genius #NedumudiVenu sir has left us. There can never be another like him. Rest well in eternal peace great one. pic.twitter.com/kBaVY0wSw4

Nedumudi Venu. A gem of an artiste . Almost a genius .. He will be remembered and celebrated for his numerous roles that he did in cinema .. My most fav role of his is undoubtedly Yavanika. Wait what about Thakara or Kallan Pavithran or many many more pic.twitter.com/UkDjPYEXQv

#nedumudivenu was a legend, but every role he got into, he would try and get under the skin of the character, for Vembu iyer in #sarvanthaalamayam , he met #umayalpuramsivaraman spent time,jammed with him and he just got it right, Venusir was kind, generous and talented. Missyou! pic.twitter.com/2Ogzw8r5ag

The legend is no more … Rest In Peace #NedumudiVenu sir . a kind person and a great teacher . Will miss u sir pic.twitter.com/rxSmfimQeY

It is a blessing to have known you and worked with you. An irreplaceable legend 🙏🏻 #RIPNedumudiVenu pic.twitter.com/TFLFA6gBZv

Deeply saddened by the passing of National Award winning actor Nedumudi Venu, who died at 73 of post-Covid complications. Born
Kesavan VenugopalNair, he acted in over 500 films starting in 1978 and was regarded as one of the finest thespians in Malayalam cinema. We will miss him. pic.twitter.com/fnrfGjv4ZW

Deeply saddened to hear about the demise of a great legendary actor #NedumudiVenu Sir. Not only was he a great actor but also a wonderful human being. Had the honor of my husband directing him in one of his films. Will miss him. May his soul rest in peace. #RIP 🙏🙏🙏🙏🙏 pic.twitter.com/twCUKWkzgc

Legends are immortal. They guide through their works.Had a great opportunity to share screen space with him. #NedumudiVenu chetta you would continue to inspire!! RIP LEGEND pic.twitter.com/Ln2CEpcMX3

Vivek Oberoi is known for speaking his heart out in his micro blogging social media site, Twitter. Recently he caught in controversy for endorsing...

“This Hero Will Act & Direct My Biopic” – T. Natarajan

Emerging Indian pace bowler T.Natarajan attended a marathon event that took place at the college he studied as a chief guest and interacted with...