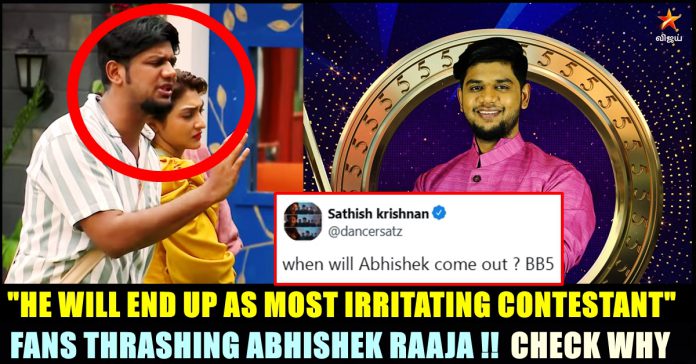 The first ever explosive promo of Bigg Boss season 5 released on Monday morning and the episode of it released with much expectations among the BIGG BOSS viewers at 9 30 PM. The episode is about nominating the contestants and selecting the captain of the same. Cibi became the captain of the week by winning the task that took place between himself, Raju, Pavani and Imman Annachi. In the task, rest of the contestants were asked to make captaincy task contestants to emote any of the feelings. As soon as the episode streamed, many of the reactions surfaced in Internet slamming Abishek Raaja for various reasons.

Dance choreographer Sathish came up with a tweet asking when Abishek Raaja will get eliminated whereas movie reviewer Prashanth uploaded a series of tweets slamming him. Many of the fans expressed their frustration over Abishek’s natural way of handling situations. “when will Abhishek come out ? BB5” Sathish said in his tweet whereas Prashanth criticized him for mentioning about Isai Vaani’s personal sufferings to make her emote. Journalist Subhakeerthana, through her tweets, slammed Abishek Raaja for the way he behaves with Pavni.

Check out some of the tweets below :

Poverty is not something to be made fun of. Isai might try to gain sympathy , but trying to make her laugh by making fun about her poverty is down right wrong and imman annachi pointed it rightly .

Abhishek and Varun are so wrong about this ! #BiggBossTamil5

For all the people who said that 'joke' in Doctor is 'just dark humour bro', idhuvum dark humour than la? 😊

We have normalised this so much that most people don't even realise it's a problem. Aprom epdinga dark humour aavum? 🤷🏻‍♀️ https://t.co/GbKGBILoER

He is showing violant behaviour with Raju too closing his mouth and punching him for not saying what he want.

He is literally intimidating physically and verbally most of the contestants.
Too toxic.#Abhishekraaja#BiggBossTamil5 https://t.co/Cbm7F5NeaJ

when will Abhishek come out ? BB5

நெஜமாலுமே சிரிச்சுட்டேன்
🤣
This is the funniest scene of BB so far.

I thought #BiggBossTamil will be an opportunity to #Abhishekraaja to redeem himself & create a better image. But a big NO.
The man is getting worse & unbearable day by day 🤯#BiggBossTamil5 #BiggBoss5Tamil

In the history of #BiggBossTamil I think #Abhishekraaja will end up as the most irritating and hated contestant ever, even beating the likes of his super seniors #julie and #VanithaVijayakumar . 🤦‍♂️🤦‍♂️🤦‍♂️
ரொம்ப கேவலமா game ஆடுறான் #BiggBossTamil5 #BiggBoss5Tamil #BiggBoss5

Abishek Raaja who interviewed almost all the top celebrities of Kollywood, has a separate fan following for the way he reviews movies. He also acted in a film named “Imaikaa Nodigal” as a best friend of Raashi Khanna. With immense passion for cinema, Abishek has been reviewing movies for years. His 2 minute reviews in “Fully Filmy” is pretty much famous and he grabbed the limelight after roasting Raghava Lawrence’s “Motta Siva Ketta Siva” film. As he got nominated for this week’s elimination, we have to wait and see if he walks out off the show.

Comment your views on these reactions that surfaced against Abhishek Raaja !!