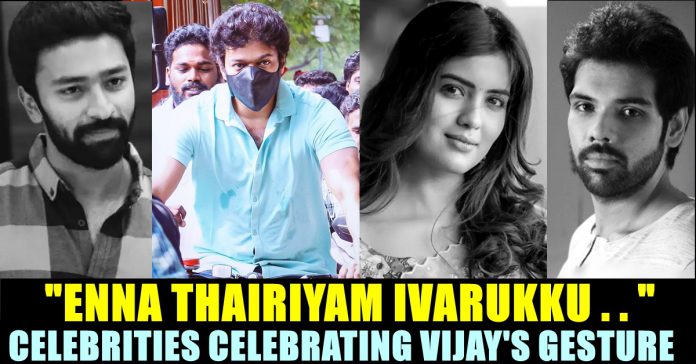 Actor Vijay’s gesture of riding cycle to the polling station in order to cast his vote became the talk of the town. Many people believe that the actor took an indirect dig at the central government’s petrol price hike whereas others say that he drove cycle to create awareness against the air pollution. However, along with millions of fans, enormous number of celebrities are celebrating the actor’s gesture. Criticisms for causing traffic and mass gathering are also surfacing in the online medium.

On the biggest day of Tamil nadu politics, some of the most prominent celebrated personalities of Tamil film industry have come forward to cast their votes at the early hours. Tamil actors Ajith kumar and Vijay have casted their respective votes and inspired their millions of fans big time.

Actor Vijay who enjoys a huge fan base came in cycle to cast his vote and the actor’s gesture grabbed the headlines of the media portals. He was spotted with a mint green shirt and blue jeans along with his cycle. Crowd gathered in a large number to click pictures, selfies with the actor. Police officials were forced to perform lathi charge to make way for others to vote.

Meanwhile, in online platforms, enormous number of fans and celebrities are celebrating Vijay for his gesture of riding cycle to the polling station. “It’s not easy to breath wearing mask, driving cycle under the extreme summer heat. But he did it in style” said director Rathna kumar with many others lauding the actor.

It’s not easy to breath wearing mask, driving cycle under the extreme summer heat. But he did it in style ❤️😊

I think it was quite cool of @actorvijay to cycle his way to vote. Quite liked it. 👍👍#Vijay #thalapathy

Previous articleWhat Happened After Ajith Grabbed The Fan’s Cell Phone ??
Next articleBJP’s Kishore Questioned Why Vijay Returned In Scooter !! Got Trolled Like Never Before

Bigg Boss Tamil show evicted a contestant after 14 long days as there was no eviction in last week. After evicting Kasthuri, wild card...