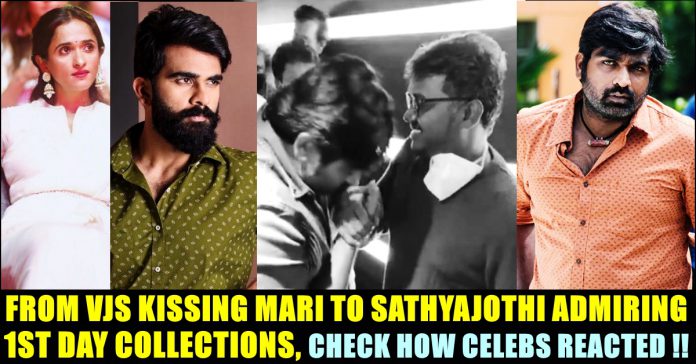 Celebrities from Tamil film industry started celebrating “Karnan” which got released on 9th of April in the theatres across the world. With Vijay Sethupathi kissing Maari Selvaraj to ace cinema personalities such as PC Sreeram, KV Anand lauding the film for its content, the film garnered large number of accolades from Kollywood and has achieved feats in box office as well.

It has been reported that the film got collected Rs. 10. 50 crore on the first day and became the first film of Dhanush to reach such number of the first day itself. Critics are also lauding the film’s intriguing content and the performances of the leads.

“Karnan takes a phenomenal two-digit number opening in Tamil Nadu. Congratulations Dhanush, Mari Selvaraj, Dhaanu and the entire team. Good times ahead for cinema!” said the official twitter handle of Sathya Jothi film, one of the prominent production houses of Tamil cinema whereas actor Vijay Sethupathi hugged and kissed Mari for making such a film.

Check out some of the reactions from the celebrities below :

The impact #KARNAN has left will stay for a long time. Such powerful visual imagery and treatment.. this film deserves everything and more. More power and love to the team! 🔥🙏🏽

#Karnan ♥️After a very long time a movie that has left me lost for words. Please watch it 🙏🙏 Thank you @theVcreations Thanu Sir for brining this gem to the cinemas. We are truly grateful 🙏

#Karnan a must watch next gen movie Dont Miss it.
Happy for u @mari_selvaraj excellent direction. @dhanushkraja steals the entire show as usual another pride movie from @theVcreations.songs &bgm👌⁦@Music_Santhosh⁩ pic.twitter.com/oPONcc8Iv6

#karnan one of the most important films in this decade for Tamil Cinema ; Truly honest from the heart of @mari_selvaraj bro and @dhanushkraja sir showed another variation of his remarkable performances over the years. Kudos to the whole team and congratulations to @theVcreations

#Karnan is so powerful and hard hitting ! @dhanushkraja sir is setting benchmarks with every film ! Salute 😇 @mari_selvaraj anna .. still not able to get over the film & its impact @Music_Santhosh the man behind this ! Vera level BGM and songs 👌🏾 Karnan should be celebrated 🎉

#Karnan
From hyd I could hear the sound of karnan.
Your first film made my system go through experience and felt the pain .
Once again you taken up " karnan" . Without. seeing I am waiting for next realty to dwan on me, waiting for next truth is too disturbing.

Happy to see the box office is pouring with numbers back to back amid the pandemic! Thanks to the audience for giving hope to the whole industry! Congratulations team #karnan for the massive opening. Good days ahead 😊✌🏼#Sulthan #WearMaskAndEnjoyMovies

A great film. Really enjoyed #Karnan those of you in India, please be safe if you’re going to the theaters to watch 🙏🏽

Do check out my views on the film👍https://t.co/NezH2nKPTM

Karnan’s plot revolves around a fearless youngster fighting against the influential people who are oppressing his people through various ways. The period film which is set in the suburbs of Tirunelveli district, talks about the struggles faced by the people who belong to a small village named “Podiyankulam”. One of the main problems which acts as a barrier for the growth of “Podiyankulam” residents is the absence of government buses and a bus stop. It is reported that the film is made based on the Manjolai riots of 1999 and 1997 Melavalavu massacre.

Previous articleGirls Couldn’t Keep Calm On Seeing This New Ad Of Dravid !!
Next articleRCB Got Hilariously Trolled After Thanking Punjab For Maxwell !!