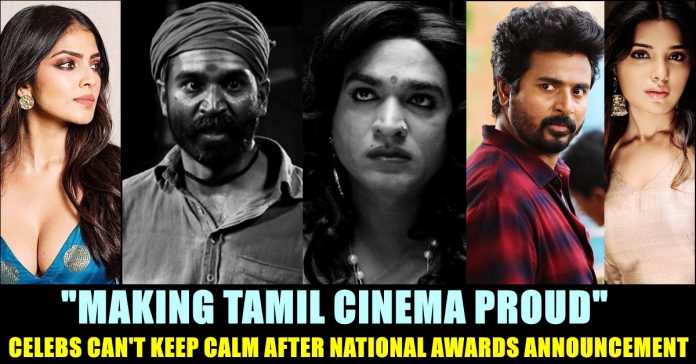 The National awards for the films that were released in the year 2019 has been announced today. South Indian cinema has got highly recognised as Marakkar: Arabikadalinte Simham, and Maharshi won the Best Film, and Best Popular Film, respectively. Dhanush’s role as Sivasami in “Asuran” won him the best actor award for the second time in his acting career. The film also became the best Tamil film. Actor Vijay Sethupathi won his first national award as a supporting actor for acting as a transgender in “Super Deluxe”.

Parthiban’s “Oththa Seruppu” garnered the special jury award and D.Imman received best music director award for composing music for Ajith kumar’s “Viswasam”. As soon as the announcements were made, people of Tamil social media wished the achievers by uploading posts and reactions.

Celebrities also wished Dhanush, Vijay Sethupathi, Parthiban and D. Imman for their national awards. “Congratulations @dhanushkraja! ‘Asuran’ is hands down one of my all time favourite performances. So so well deserved! May you continue flying higher and higher!” wrote actress Malavika to wish Dhanush whereas director Rahul ravindran said “Vijay Sethupathi…. what an incredible story of perseverance and hardships his career has been. What a colossal talent. So damn happy for the man” in his tweet.

Congratulations @dhanushkraja sir on #NationalFilmAwards
Much much deserving ✨😇

Vijay Sethupathi…. what an incredible story of perseverance and hardships his career has been. What a colossal talent. So damn happy for the man❤️

Congratulations @dhanushkraja ! ‘Asuran’ is hands down one of my all time favourite performances. So so well deserved! May you continue flying higher and higher! 👏🏻👏🏻🤗

Congratulations @dhanushkraja sir on the #NationalAward for #Asuran ! The film combined with your performance is a land scape changing film for Tamil/ Indian Cinema. We admire you, are inspired by you every time and love you. The best of the best !! #PolladhaBhoomi is my fav 😍

A twenty-four-year-old woman from Ariyalur in Tamil Nadu has committed suicide after she was scolded for spending too much time on TikTok video app....