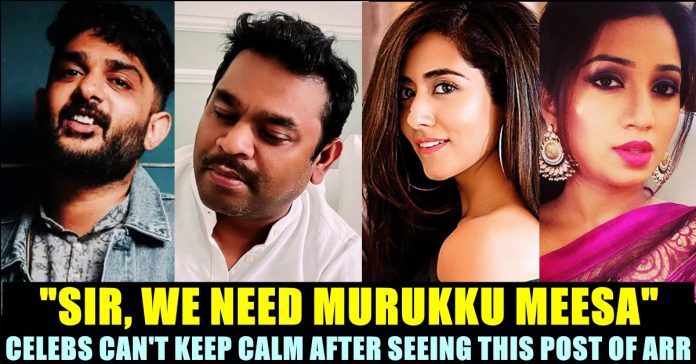 After A.R Rahman uploaded a picture of himself sporting a mustache, a number of celebrities including singers Shreya Goshal, Sid Sriram started flooding his comment section. It was an imaginary mustache made by the Artificial Intelligence effects of Zoom meeting applications live studio. Many wished it was real and few expressed their wish of the Oscar winning musician growing a beard as well. It is very well known that Rahman, ever since he made his debut to the film industry through “Roja”, is being seen without a beard or mustache in his face, despite the several number of get up changes he went through in the past 25 plus years.

Being the only Indian musician to win the academy award, A.R Rahman is known for his cool and composed attitude. His calm attitude even after winning Oscar twice, is world famous. He is one of the most loved musician in the world and the people of Tamilnadu are very proud on the fact that he works predominantly in Kollywood industry. Having composed for Atlee-Vijay’s “Bigil” recently, the composer is being lauded by the fans for the music he has been making throughout his career.

The musician is pretty much active in social media platforms lately. He who enjoys 55 lakh followers in Instagram, came up with a post in his official Instagram account which showed the picture of the musician sporting a mustache for the first time. However, it was not real as the “Enthiran” musician included a caption which said “mustache by the #zoommeeting app’s live studio AI Efx ..what do you think ? 😄”

As soon as the picture got surfaced in the timeline of A.R Rahman, followers of the musician couldn’t keep as we could see many kind of reactions flooding the comment section of his post. “It can be a phase!! Keep it for real” said national award winning singer Shreya Goshal and emerging singer Sid Sriram said that he thought that it was real for a minute.

Rahman’s son A.R Ameen, Television host Ma.Ka.Pa Aanand, Singer Vijay Yesudas reacted to the post as well. Check out the screen shot of their comments below :

In his 28 year long career, Rahman has scored music for 145 plus films across various languages. He who turned writer recently through his own production venture “99 songs”, has composed music for the upcoming Bollywood film “Mimi” which stars Kriti Sanon. The single “Param Sundari” had already become a chartbuster with lakhs of people doing reels for it in Instagram. Comment your views on Rahman changing his looks by sporting a mustache !!

Previous articleShivani Produced Proof For Acting In ‘VIKRAM’ To A Fan Who Asked !!
Next articleVijay Sethupathi Reacts To People Who Wants To Know About His Identity !!

What Dhoni Actually Told To Deepak Chahar In The 19th Over ?? Malti Chahar Reacts !!

Chennai Super Kings skipper MS Dhoni is known as ‘Captain Cool’ for a reason. Whatever the situation, he just doesn’t let his emotion get...