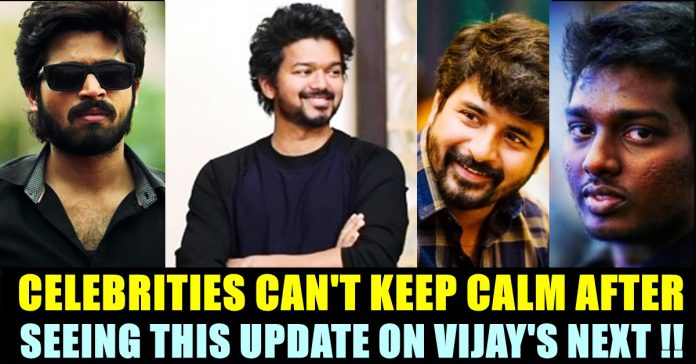 Actor Vijay who is awaiting for the release of his “Master”, has announced about his next project. Collaborating with Sun pictures after Sarkar, Vijay, this time going to join hands with young filmmaker Nelson Dileepkumar for his 65th film. The crew made the announcement by uploading a video in their respective social media accounts. Music of the film is going to be composed by Aniruth ravichander.

The video showed actor Vijay having a conversation with the owner of Sun pictures Kalanithi Maran in the office of Sun TV. After Neslon joined them, Vijay shakes his hands with Kalanithi Maaran and the motion video of the grand announcement starts filling the frame.

Tentatively titled as “Thalapathy 65”, the film is planned to go on floors soon. “Happy to announce my next film with @actorvijay sir” wrote Nelson Dileepkumar while sharing the announcement.

Nelson who debuted to Tamil film industry through Nayanthara’s “Kolamaavu Kokila”, is currently directing Sivakarthikeyan’s “Doctor”. The film’s single “Tik Tok” became a sensational hit among Kolywood fans. He attempted to direct Silambarasan in “Vettai Mannan” years back but failed in it. The film was supposed to have actor Jai as one of the leads as well. Sivakarthikeyan disclosed that he worked as an assistant director in the movie while talking an award function.

As soon as hearing about the news, along with fans, many celebrities of Tamil film industry got excited and expressing their joy over the announcement. “Extremely happy for you Nelson na. my brother with big dreams joining big names. Best wishes to @actorvijay sir, @sunpictures and my dear @anirudhofficial” Sivakarthikeyan wrote in his tweet.

Director Rajkumar Periyasami who directed a film named as “Rangoon” by having gautham Karthik as lead, posted an old picture of Nelson with Vijay’s poster and wished him.

Check out some of the reactions from other celebrities such as Kavin, DD etc :

If we believe in a path and work hard towards it, no one can stop your dream.. ! @Nelsondilpkumar na is a living example for this truth.. ❤️#Thalapathy65 https://t.co/yDnElNSnyL

Vera level @Nelsondilpkumar brother. So happy for you. Congrats to my dear @anirudhofficial @sunpictures & team #Thalapathy65 .. Much love to our #Thalapathy @actorvijay na !! https://t.co/anKF4Q4Hrb

The film is touted to be a comedy drama. Meanwhile, actor Vijay’s action thriller “Master” is expected to hit the big screens from “Pongal”. Comment your views on this combination !!

Previous article“What Happened To Sushant’s Case After Election ?” Top Heroine Questioned
Next articleVideo Of Chennai Cop Getting Thrashed By Public For Misbehaving With A Woman Goes Viral !!