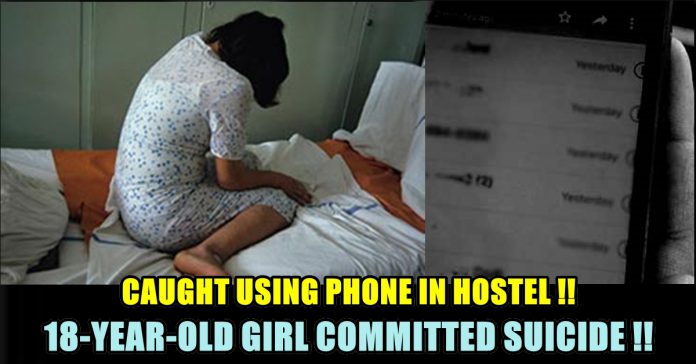 An 18-year-old student of Chartered Accountancy (CA) has committed suicide in her college hostel on Saturday. Identified as B Maneesha, the young girl took the extreme step after the hostel incharge found her talking on a mobile phone inside the hostel, said the police.

According to police, Maneesha, hailing from Karimnagar district was pursuing CA at the CMS CA Academy in the city and residing in the college hostel at KPHB. As per the rules, use of mobile is prohibited in the college as well as the hostel premises for all students.

On Saturday afternoon, when Maneesha was talking on the phone, the hostel warden noticed her and informed the principal who in turn informed Maneesha’s parents and asked them to come to the college.

“Afraid over confronting her parents on the issue, the girl ran into the hostel and hanged herself to the ceiling,” a police official told Telangana Today. Police registered a case of suspicious death and handed over the body to their parents after an autopsy at the state-run Gandhi Hospital. After Maneesha came to know, she got scared and depressed, due to which she reportedly hanged herself in her hsotel room. A case of suspicious death was registered and is under investigation. Her body was handed over to the family.