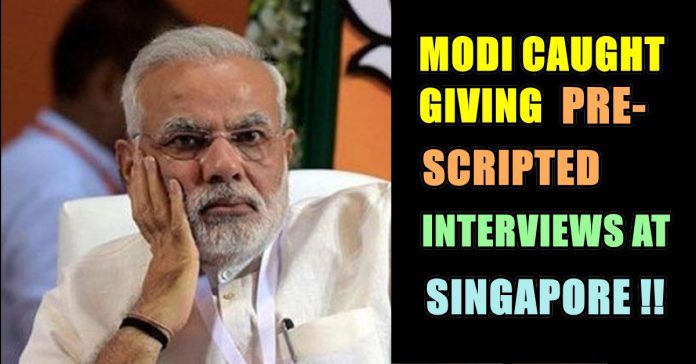 During his Singapore visit, PM Modi was interviewed by Nanyang Technological University president Subra Suresh in front of a live audience. Some pre-decided members from the audience also posed questions to PM Modi.

Prime Minister Narendra Modi has found himself in a spot of bother as questions may be raised on whether his latest interview at Singapore’s Nanyang Technological University on Friday was scripted.

The prime minister was interviewed before a live audience by NTU president Subra Suresh, who, as well as asking him questions also took questions from pre-decided members of the audience. As part of the ‘Transforming Asia Through Innovation’ session, Suresh began by asking about the challenges faced by Asia and what it needed to do to address them. Modi said, “Suresh asked me about the challenges faced by Asia in its ambition to have a bright future. One fact is clear that the entire world is now convinced about the 21st century belonging to Asia. The biggest challenge is whether we the people of Asia feel this fact or not. Is it that we are only feeling good about hearing or it’s actually motivating us to make the 21st century the century of Asia. This is a big challenge. Even today, we are still influenced by other parts of the world since this is how we’ve lived our life. That’s why even we find it hard to believe that this is our turn, we are capable of doing something and we will do it.”

However, what came next was nothing less than shocking (Watch video from 2 mins  and 29 secs till the end). The content communicated to the audience by Modi’s English translator sounded like a page from a script or government statement. She said, “The question that was posed to me by Suresh was Asia’s main challenges and how can we resolve them. First of all, I think the biggest challenge before us is that the 21st century belongs to Asia, and do we really feel this ourselves, do we have this sentiment? I think that is the biggest challenge because in this part of the world, we have been so much impressed by the rest of the World that we do not feel that now it is our turn. Asia has seen the maximum rise in prosperity, opportunity and freedom in the World. Japan led the process, Asian tigers followed, China has become a major economy and it is India’s turn to progress now. Yet, Asia has many challenges, South Asia, South-East Asia in particular, have similar strengths and opportunities, weaknesses and challenges. There are the following challenges that are common: • Skills for the digital age • Creating adequate jobs in the age of digital reception • Agriculture • Productivity • Water • Pollution • Rapid and mass urbanization • Sustainable habitats and affordable housing • Climate change • Protection of biodiversity • Building Sustainable infrastructure • Affordable healthcare • Protecting our ocean and blue economy These challenges require collaboration among governments, universities and laboratories. Policy interventions are important. A lot of finance would be needed, but given the scale and magnitude. We need innovation and technology to address these challenges. These should be the priorities of our governments.” It appears that, as part of a scripted interview, Modi was meant to say everything the lady translator read out from a piece of paper but the former simply forgot to. However, the translator went ahead and read everything from the paper, she may have been handed to by the prime minister’s PR team. From exactly 3 mins and 49 secs, you will notice that the translator roughly starts translating what PM Modi actually said in Hindi. However it starts getting bizarre when at 4 mins and 18 secs the translator is seemingly caught reading out from a script adding facts and figures to the PM’s purported answer, which he never gave in the first place. Modi had come under flak for his interview during his London trip in April, where lyricist and the censor board chief, Prasoon Joshi, ‘interviewed’ him before a live audience. Joshi’s questions had included ‘how does Modi manage to work such long hours’ and ‘I detect a piety in you, were you always like that or you achieved this slowly and gradually.’ Not known for entertaining two-way communication, Modi’s previous TV interviews have been given to Zee News, Times Now and News18, a channel owned by Mukesh Ambani. On all those occasions, his interviews had come under heavy scrutiny after the channel representatives agreed to indulge in glorification of the prime minister.

Well , What do you think on this bizarre incident ?

A video that surface claiming that young Indian Player Rishabh Pant got "ignored" by senior players in trending in social media platforms with various...

On Sunday, The world's richest temple trust Tirumala Tirupati Devasthanams has said that it can't pay salaries and meet daily expenses due to the...

Rajesh Kannan Singham who is working as a police constable in the station located in Ambalamula area next to Kudalur, got condemned by judge...