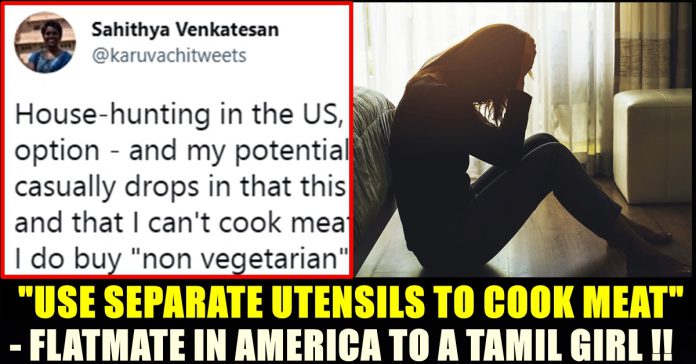 A twitter user whose handle name reads “Sahithya Venkatesan” shared about her experience on sharing a flat with an individual who is potentially “upper caste” and a vegetarian in the United States of America. The series of tweets Sahithya shared narrating the ordeal she went through, blew up in the micro blogging social media site with people reacting in various ways.

Despite of several movements and protests against the existence of caste discrimination in India, we could still see people boasting about their caste in front of others. They who think that speaking high of their caste gives them the pride, often try to impose it on others as well. Sahithya who went through it in the United states, worried about Casteism being alive and thriving in the US.

After trying to explore the flat sharing option in US, Sahithya says that her potential “upper caste” flatmate, said that it is a vegetarian household and wanted her not to cook meat. The individual who said that Eggs maybe allowed, suggested Sahithya to use separate utensils, separate microwave and eat in her own room if she buys “non-vegetarian” food.

She further said that she could understand the demands as she is an Indian and fumed about the arrogance of her flatmate to impose his upper caste personal preference on the entire household in the United States, that too in a house owned by an American. It is notable that the flatmate had rented one room just like Sahithya.

She also sought suggestions to her followers and asked them to direct her to housing laws against discrimination that she went through. “Oh why am I even surprised! Casteism is alive and thriving in the US and New Jersey is breeding ground.” Sahithya said through her tweets. Check out her series of tweets below :

I would have to use separate utensils and a separate microwave and eat in my own room. And ofcourse I'd understand all this because I'm Indian. +

Oh why am I even surprised! Casteism is alive and thriving in the US and New Jersey is breeding ground.

Does anyone know/ direct me to housing law against discrimination of this sort? @sunsetkatz @RUGradsUnited

When a follower said that it might be because of his Vegetarianism and not because his caste, Sahithya replied saying “Yeah. But no vegetarians and vegans express their preference and open a conversation for cohabiting. Caste privilege is what gives that entitlement to impose authority where you have none.”

Yeah. But no vegetarians and vegans express their preference and open a conversation for cohabiting. Caste privilege is what gives that entitlement to impose authority where you have none.

She also informed her followers that she left the place.

Previous articleVideo Of “Parithabangal” Fame Gopi & Sudhakar Getting Rejected By VKPY Judges Goes Viral Now !!
Next article“Alex Pandiyan” Fame Sanusha Gives Back To Those Who Body Shamed Her After Losing Weight !!