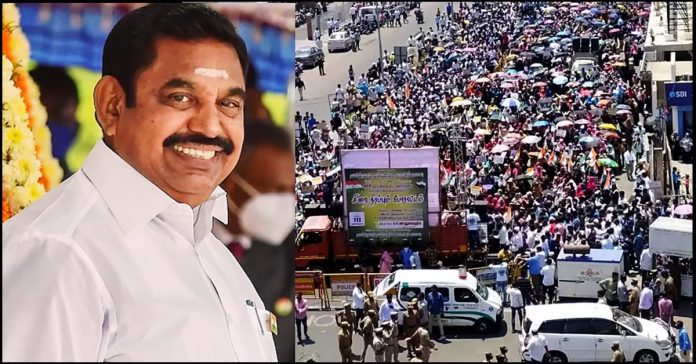 Chief minister Edappadi K Pazhaniswamy has made a biggest announcement during a rally at Tenkasi, Tamil nadu. On Friday, while interacting with the public, he has announced that all the cases filed against COVID 19 lockdown violators and anti CAA protesters will be withdrawn.

With this announcement, a total of 10 lakh cases are set to be taken back. “All the cases filed against the public for lockdown violations during the COVID 19 and the cases that were filed against the anti CAA protesters will be withdrawn” Chief minister Edappadi K Pazhaniswamy said at the rally.

During his campaign at Thenkasi, Chief minister Edappadi K pazhaniswamy has also said that vegetable and fruit markets will be constructed in 10 districts with the expenditure of Rs. 20 crore each for the benefit of farmers to get the marginal prices for their produce.

“MLA said that vegetables and fruits are yielding here in large number. To make the farmers get the reasonable price for their production, we are constructing a grand market in 10 districts with a budget of Rs. 20 crore each. Government will consider constructing one in Tirunelveli as well” Chief minister Edappadi K Pazhaniswami said.

Everytime the production house of "Varisu" comes up with a statistic about their film's collection, Mr. Raahul, executive producer of "Thunivu" movie gives a...