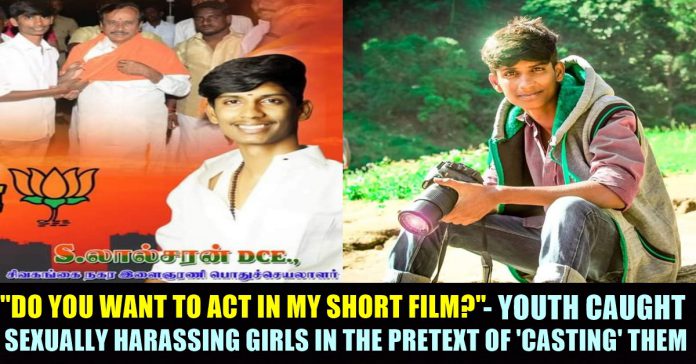 Lal Saran, is a photographer from Sivagangai, Tamil Nadu. He is traced by the police after a mother and daughter filed a case against him.

Lal Saran alias Bharath Lal runs a photo studio in Sivagangai. Three months back, a fourth-year Law College student has visited his studio to click a picture. To welcome her he has given her a juice mixed with drugs. Lal Saran has sexually harassed her after she fell unconscious. He has also recorded a video. Later he has sent the video to the girl and started threatening her. He has also made her visit the studio frequently and harassed her. The girl got pregnant.

The girl has informed her mother. Her mother was worried about her daughter’s life and has gone directly to the studio. She has pleaded with the photographer to give them the photographs and videos. However, the photographer has verbally abused both of them and chased them out.

The mother and daughter have approached the police for help. On investigation, the police have come to know this is not the first time Lal Saran is doing this. He has sexually harassed many girls who visit his photo studio. He tells them that he is going to direct a short film and he wants to cast them in a role. He makes them fall for him and tricks them into bed. He also records photos and captures videos of the girls. Now, Lal Saran has disappeared. The police are in search of the accused.

This incident has shaken everyone and many have shown their hate through comments.

I remember watching this kind of scene in valtar vetrivel movie…where the girl will be offered gold spot drink drug mixed and video taped by sathyaraj brother.u mean to say even in 2021 same technique is been followed and the girl drinks that in a strange shop. Good maturity

Julie of Bigg Boss season one fame, is pretty much active in social media platforms nowadays. She who is currently participating in "Bigg Boss...

Team Chennai Superkings registered their second win in the tournament in style on Thursday by defeating 5 times IPL champions in the last ball...